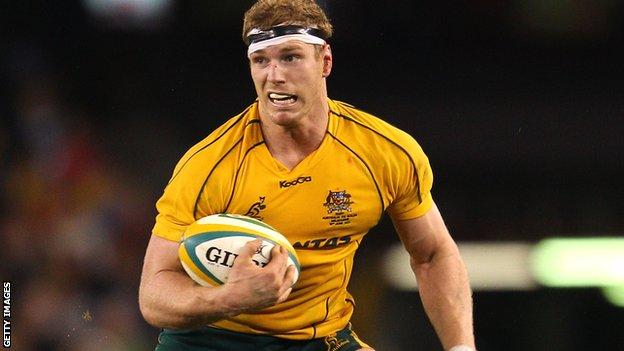 The 24-year-old was due to return after knee ligament damage but scans showed he had suffered a calf strain.

The Wallabies will also be without lock Kane Douglas, who has a knee injury.

They will learn on Wednesday if another lock, Rob Simmons, will be cleared to play after he was cited for a dangerous tip tackle against France last weekend.

The England wingers are pretty, really good looking. I just can't wait to go against them

However, the combative Digby Ioane, who has missed the last two matches with knee trouble, will be available against England and is relishing the prospect of facing England winger Chris Ashton, who returns after being suspended for last weekend's 54-12 victory against Fiji.

"The England wingers are pretty, really good looking. I just can't wait to go against them," the 27-year-old said.

"It will be really exciting and an honour to play against Ashton.

"I've never played against a winger like him so I'm looking forward to it."

Ashton scored twice when England beat Australia 35-18 in 2010, running the length of the pitch for his second, and Ioane added: "I hear he's coming back into his stride and is really respected over here. I've watched a lot of him on YouTube. There's a lot of clips on there of him scoring tries.

"I respect what he's done for his country and his league background. Normally in Australia any league players who join union end going back to league.

"I find going from league to union is pretty hard, while it's pretty easy the other way around. I find league's not skilful, you've just got 13 guys and you have to run against them. Union is different, there's more to it."