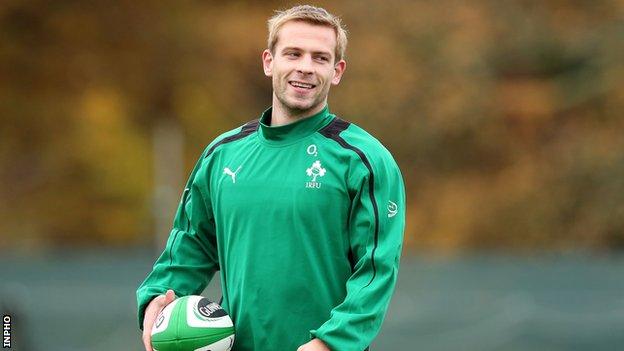 Paul Marshall looks set to feature in Ireland's clash against Fiji on Saturday after being one of four Ulster players added to Declan Kidney's squad.

Marshall's Ulster team-mates Craig Gilroy, Tom Court and Roger Wilson have also been called up to the squad along with Stephen Archer and Devin Toner.

Scrum-half Marshall looks likely to be involved on Saturday as Eoin Reddan is struggling with an ankle injury.

Reddan sustained the injury in the defeat by South Africa last weekend.

Donnacha Ryan and Cian Healy will be in contention for this weekend's game after being tested for concussion following the defeat by the Springboks.

Ross was replaced by New Zealand native Michael Bent after 63 minutes of last weekend's crash after the Irish scrum had begun to creak.

On Monday, it was revealed that Paul O'Connell and Stephen Ferris will miss Ireland's final autumn international against Argentina on 24 November.

The Lions duo missed the 16-12 defeat by South Africa in Dublin and had already been ruled out of this Saturday's uncapped meeting with Fiji.

O'Connell was sidelined with a back problem while Ferris sustained an ankle injury while playing for Ulster.

The Lions forwards' absence means Ireland will be without six key personnel against the Pumas, with Brian O'Driscoll, Rory Best, Rob Kearney and Sean O'Brien completing the list.