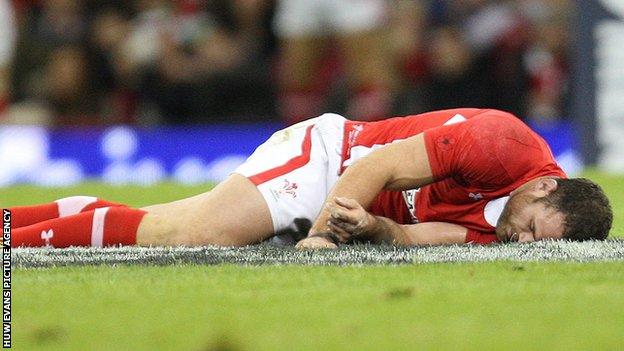 Concussed Wales centre Jamie Roberts knows the hits will keep on coming against Samoa - one of the most "brutal" sides he has ever encountered.

Roberts was knocked out during Wales' 26-12 defeat to Argentina on Saturday.

He hopes to pass a fitness test on Wednesday to face Samoa on Friday but expects another uncompromising test to match their 2011 World Cup win.

"[That was] one of the most brutal games I've played in my career," claimed 26-year-old Roberts.

"That World Cup game was very tough in no uncertain terms.

"I have huge respect for teams like Samoa - really, really good rugby players.

"They wear their heart on their sleeves when they play. Big physical guys. Very tough team."

Roberts, who will leave Cardiff Blues at the end of the season, lasted only 24 minutes before having to be helped off by medical staff with what was described afterwards as "mild concussion".

He added to Wales' injury worries which have seen Alun Wyn Jones (shoulder) and Josh Turnbull (knee) ruled out of the rest of the autumn series following the Argentina defeat.

Since last Saturday's match, medical student Roberts has had to follow strict guidelines on a return to training following the blow to his jaw.

"I was a bit worse for wear on Saturday afternoon. [I took] a freak head right on sweet spot on the jaw and knocked out... before I hit the floor," said 45-times capped Roberts.

"The medics didn't feel I was right to come back on. [I was a] bit disorientated but after the game I was fine really.

"Hopefully I will be passed fit to play but the main thing is you don't get repercussions of symptoms of memory loss and headaches in the week's training after your injury."

Roberts, like the rest of the Wales camp, is keen to make up for a thoroughly flat display against the Pumas during which they failed to score a try for the first time in 22 internationals.

"Friday is a huge test for us, not just as players but [in terms of the] Welsh public," he said.

"We let them down with our performance on Saturday and the players are well aware of that.

"There's no better job than to redeem yourselves and turn things round.

"We have to make sure we are a bit less tactically naïve than Saturday. Probably didn't play rugby in the right areas. We played lot of rugby in our own half which we can't afford to do against Samoa.

"The main thing going into this week is our defensive structures and getting that right, and defensively you are on the money for every second of the game, which we weren't on Saturday and that cost us two tries.

"The most frustrating thing is the result. We were pretty disappointed as a squad we didn't perform to our usual standards and certainly we were well blow what we expect of ourselves.

"But I suppose the great thing with rugby you get that chance a week later to redeem yourself and wrong the rights of Saturday."

On his decision to leave the Blues, news which broke on Thursday, Roberts added: "The timing of that being released to the Press wasn't great. It didn't affect me last week.

"It's taken me a good couple of months to make that decision. It's a difficult one to make.

"As a player, having grown up in Cardiff - 21 years of education - you just think it is time to fly the nest, and I'm massively looking forward to trying something different next year.

"At the moment I'm completely focussed on the autumn."