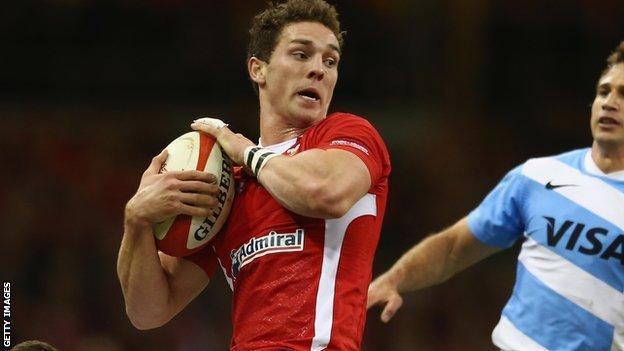 Injury-hit Wales could consider switching wing George North to centre for their match with Samoa on Friday.

Jonathan Davies is already ruled out and Jamie Roberts faces a fitness test on Wednesday after going off in the 26-12 loss against Argentina on Saturday.

"George certainly would be an option in that area. Who knows? We've got other players in the squad," he said.

"Ashley Beck has been training with us and he's doing pretty well at this moment in time, so hopefully Ashley will come through and be available for selection.

"Obviously we're hoping Jamie comes through as well and he's available for selection on Friday as well. Obviously Scotty [Scott Williams] is fit and Jon [Davies] will be missing this week again."

He was forced to leave the field after just 24 minutes and was replaced by Perpignan's James Hook, who is also available for selection this week.

Scarlets centre Davies missed the match with Argentina with a groin strain which also rules him out of Friday's game.

Beck has been battling with a hip injury, but the Ospreys centre was able to take full part in training for the first time on Tuesday.

He impressed for Wales during the summer tour of Australia, starting in the second and third Test matches after coming on as a replacement in the first.

But the long-mooted switch of North to centre remains an option for the Welsh management, though it seems more likely he will stay on the wing for now.

"He's a quality player and he could get his hands on the ball quite early as well [if moved to centre]," added Jenkins.

"But again, you know, the centres we've got we're reasonably happy with, and hopefully they can come through Ashley and Jamie, and be available for selection on Friday."

Whoever plays in midfield, which will be revealed at 13:00 GMT on Wednesday, Jenkins is sure Wales have to use strike runners like North more often than they did against the Pumas, when they failed to make a single line break.

"We were disappointed generally with a lot of things that happened Saturday, and not really giving George and Cuthby [Alex Cuthbert] and certainly Lee [Halfpenny] opportunities - didn't give them a chance to finish off," he said.

"It's certainly something we'll work hard on - we're working hard on it anyway but it was generally a disappointing day all round Saturday and that was one of the aspects we were very disappointed about."