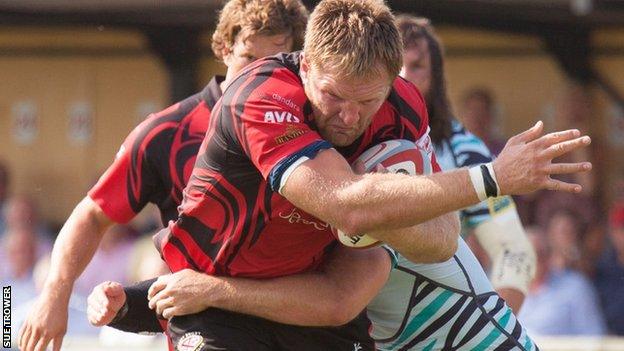 Jersey skipper Nathan Hannay has described his selection for the Championship representative squad as a "huge honour".

The team, made up of players from all 12 clubs in the second tier of English rugby, take on the Maori All Blacks at Doncaster's Castle Park on Saturday.

Hannay, the only Jersey player to make the squad, has been named in the starting line-up at second-row.

"It's a huge honour for me and for Jersey," he told BBC Radio Jersey.

"Bonding is probably the key word, it's my first year in the Championship and if I can make a few friends along the way it would be good.

"Hopefully I'll face the Haka for the first ever time, that's going to be a huge honour in itself."

Hannay joined the islanders from Launceston in 2010 and has appeared more than 40 times for the club.

The Championship representative game is a chance for the 28-year-old to turn his attention away from Jersey's league campaign, which has seen the islanders lose seven of their opening nine matches.

"Other sides would probably fold and crumble after six losses on the bounce," said second-row Hannay.

"But we've got a young and good side and I'm confident in the boys in Jersey that we will hopefully fight and stay up."

Saturday's match is the second of three games for the Maori on their tour.