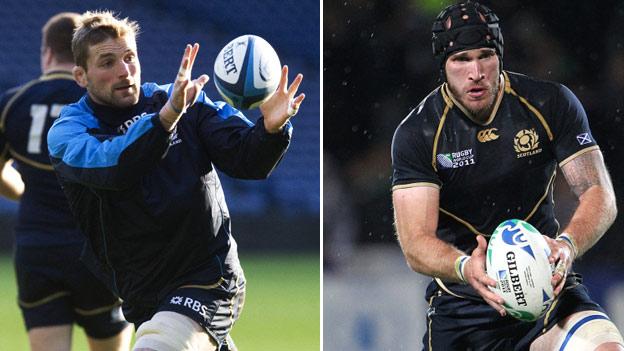 Scotland flanker Alasdair Strokosch has been ruled out of Saturday's Test against South Africa through injury.

Strokosch, who has a calf strain, will be replaced by Glasgow open-side John Barclay, who will earn his 40th cap.

Captain Kelly Brown, who started at number eight against New Zealand, takes over from Strokosch at blind-side.

Dave Denton, who came on for starts at number eight with Euan Murray returning at tight-head in place of Geoff Cross.

Murray, 32, missed the because his religious observance means he does not play on Sundays.

Despite the loss of Strokosch, Scotland head coach Andy Robinson - who has drafted uncapped Edinburgh flanker Stuart McInally onto the bench - is confident Barclay, man-of-the-match when Scotland beat South Africa two years ago, will shine.

"We wish 'Stroker' a speedy recovery," said Robinson. "John is an experienced campaigner, while Stuart was with us on the summer tour and is raring to go."

The Scotland head coach expects a "bruising battle" against South Africa and is hoping Denton - who starred in this year's Six Nations - will excite the fans.

"I was pleased with Euan's contribution both at scrummage and in open play during the summer tour, while Denton's aggressive carrying is something that really gets the crowd going," he said.

Robinson has made four changes to the bench, where Dougie Hall is preferred to Scott Lawson and Cross replaces club-mate Allan Jacobsen.

"Dougie Hall has had a good season for Glasgow," added Robinson.

"Peter Murchie is another who has had a fine start to the season with Glasgow and his desire to dominate in aerial combat has been a factor in selection."

South Africa will be out for revenge, having lost on their last visit to Murrayfield two years ago on a horrible, wet day.

"I guess some of our best results over the last couple of years have been in wet conditions, particularly against the southern hemisphere teams," said Barclay, who was man-of-the-match in that 21-17 win against the Springboks.

"It's something we are used to because we play in it pretty regularly.

"But, with the way we are trying to evolve as a team, we want a dry ball and I think we have the players for a fast tempo, offloading game.

"You will always get that physical approach from South Africa but they certainly have some very creative players.

"They can go for that battering ram approach and at the same time they quick, skilful, talented backs."

Wins against the Springboks and Tonga this month could see Scotland climb into the top eight in the world rankings and therefore claim a more favourable seeding in the 2015 World Cup draw.