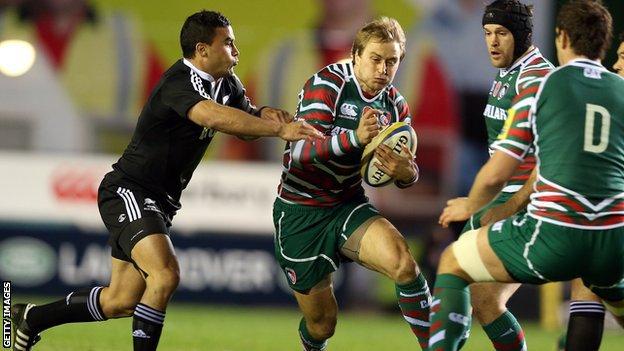 Leicester Tigers and England back Mathew Tait has thanked the club for their support during his 13-month injury nightmare.

A groin injury meant he had not played a first-team game since last October.

But Tait, 26, completed 80 minutes at full-back in the thrilling 32-24 win over the touring New Zealand Maori side at Welford Road on Tuesday.

He told BBC Sport: "I owe the club a lot. There aren't many clubs that would stick by someone for such a long time."

It's been tough...To get 80 minutes is a big milestone and it's just a case of building on that

Tigers director of rugby Richard Cockerill has confirmed Tait will also play in the LV= Cup tie against London Irish on Sunday.

The friendly against the Maori was just Tait's fifth appearance, and third start, since moving to Welford Road from Sale in the summer of 2011.

"It's been pretty difficult," he said.

"The nature of the injury means there has not been a definitive recovery period so it's been set goals and taking it month by month.

"It's nice to finally get 80 minutes, and what a great result to beat the Maoris. Hopefully I have done enough to warrant getting picked for the Irish game and can keep building week by week.

"To get 80 minutes is a big milestone and it's just a case of building on that.

"I am not particularly bothered where I play. It's just nice to be back playing. It's been tough period of time out and it's great to be back in the mix and I'll play where I am needed."