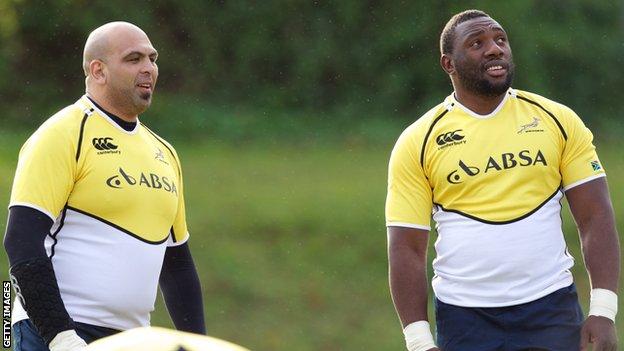 Prop Gurthro Steenkamp will start for South Africa against Scotland in the absence of Tendai Mtawarira, who returned home with a heart condition.

CJ van der Linde had replaced Mtawarira for the 16-12 win over Ireland but drops to the bench.

South Africa coach Heyneke Meyer makes one other change, with Juan de Jongh starting at outside centre in place of the benched Jaco Taute.

Although Jannie hasn't trained this week, he'll definitely be fit for Saturday

The coach thought consistency of selection was important for the match at Murrayfield.

"I felt playing Scotland, because they're a quality side, this is more or less the same side," Meyer said.

"I thought our defence was excellent in the previous game and playing Scotland, who scored three good tries against the All Blacks, we wanted continuity.

"I thought it was 10 minutes of brilliance from New Zealand which actually cracked open the game.

Meyer was disappointed to lose Mtawarira because of a recurrence of heart palpitations, but thought Steenkamp would step up to the mark in Edinburgh.

"[Losing] Beast [Mtawarira's nickname] is a huge setback and he is an experienced player coming in," said the coach, who also thought that De Jongh deserved his opportunity.

"Juan's been great in training and I just felt he needed a chance to show what he can do."

The Springboks have an ongoing concern over an ankle injury for tighthead prop Jannie du Plessis.

"He's really a warrior," said Meyer. "We definitely need him there.

"Jannie is an unbelievable player, really wants to play for his country and, although he hasn't trained this week, he'll definitely be fit for Saturday."

Saturday's autumn Test at Murrayfield comes two years on from the Springboks' last trip to Edinburgh, when the then world champions were beaten 21-17.

Following the draw in Argentina and losses to Australia and New Zealand in the Rugby Championship, the win over Ireland was South Africa's first of the year away from home and Meyer views another as essential.

"Winning is non-negotiable," he said. "I don't care whether it's by one point or two points, we just want to go out there and win the game.

"We've been struggling away from home and now I can see the confidence is coming."

Meyer views it as a great warm-up for a 2015 World Cup being played in Europe.

"I think Scotland are superb at the breakdown, if you just look at what happened against New Zealand," he said.

"It's more fierce, it's more a battle and more physical, I believe, because it's a little bit slower and you need a different type of player.

"With the World Cup being here, the more we can play here the better."