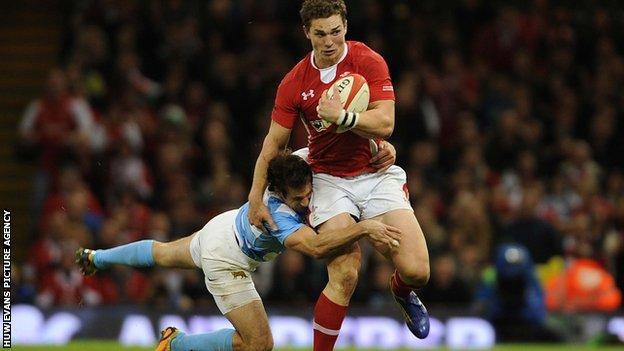 Jonathan Davies believes Wales cannot afford to lose against Samoa after their shock defeat to Argentina.

Interim Wales coach Rob Howley has made eight changes for the clash with Samoa on Friday night.

Former Wales fly-half Davies, a dual-code international, believes the pressure is on Wales to deliver a victory to get their campaign back on track.

"After last week's performance, the pressure is now on them," said Davies.

"They cannot afford to lose against Samoa and it is going to be a very tough game."

Wales suffered a 26-12 defeat to Argentina at the Millennium Stadium, only their second defeat to the Pumas in Cardiff.

Howley has drafted in Justin Tipuric at open-side flanker, while Ryan Jones takes over as captain on his return to the side at blind-side flanker.

Dan Biggar and Mike Phillips form a new half-back pairing and Ashley Beck comes in at centre instead of Scott Williams.

Alun Wyn Jones (shoulder) and Josh Turnbull (knee) - both ruled out for the rest of the series - and Matthew Rees (calf) were unavailable for selection.

Cardiff Blues' Jamie Roberts passed a fitness test on Wednesday to continue at centre despite suffering "mild concussion" against the Pumas.

His new partner will be Beck, who played all three Tests on the summer tour to Australia in Roberts's absence with a knee injury.

Davies does believe interim coach Howley has picked a strong Wales side and has backed the selection changes to face Samoa.

"Dan Biggar has played exceptionally well this year and he has varied and managed his game very well."

Samoa warmed up for the encounter with a comprehensive 42-12 win over Canada at Colwyn Bay's Eirias Park on Friday.

Wales will be seeking to avoid a fifth successive defeat under interim coach Howley, who is deputising will Warren Gatland fulfills British and Irish Lions duties.