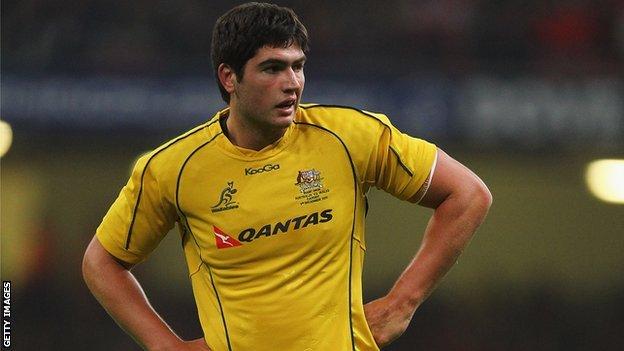 Lock Rob Simmons will miss the rest of Australia's tour of Europe after being given an eight-week ban.

The 23-year-old was cited for a tip tackle on Yannick Nyanga during the Wallabies' 33-6 defeat to France in Paris on Saturday.

The ban rules him out of the Tests against England at Twickenham, Italy in Florence and Wales in Cardiff.

His absence adds to Australia's problems in the second row, with Kane Douglas already out with a knee injury.

Welsh referee Nigel Owens was heard apologising to the France team for the officials' failure to issue a red card for the challenge due to their collective inability to identify Simmons.

International Rugby Board judicial officer Robert Williams, who heard Simmons's case at a hearing in London, said the Australia forward's tackle was at the "high end" of the scale of IRB sanctions.

However, he then allowed the maximum six weeks' mitigation based on Simmons's "exemplary previous disciplinary record and his conduct at the hearing".

Simmons has the right to appeal the ban.