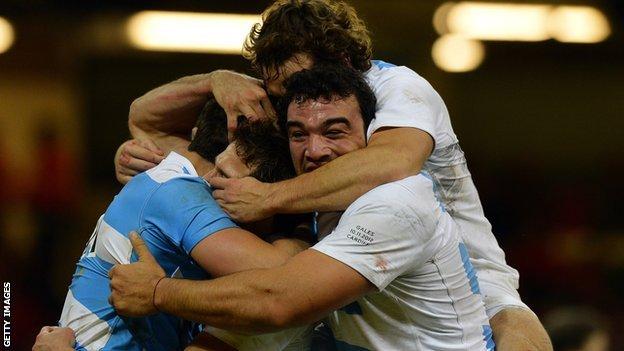 Argentina have made life difficult for Samoa by beating Wales in Cardiff, according to their backs coach Darryl Suasua

The Pumas beat the Grand Slam champions 26-12 in the opening match of the autumn series on 10 November.

The defeat has prompted Wales into making eight changes for the meeting with Samoa on Friday.

"Argentina, what they did to Wales last week, does us no favours at all," said Suasua.

Samoa beat Canada 42-13 in Colwyn Bay on 10 November, and have beaten Wales in Cardiff on two previous occasions.

The last time the nations met Wales beat Samoa 17-10 at the Waikato Stadium in the group stages of the 2011 World Cup.

Suasua is expecting the changes to re-invigorate the Welsh team.

"Those guys coming in are getting their chances and they'll bring energy to the game that possibly was lacking against Argentina.

"They made a lot of tackles against Argentina last week and the Welsh just couldn't find that extra spark," he said.

Suasua said the Samoans had not been shocked by the quality of the Argentinian performance against Wales, but were surprised by Wales' failure to handle the challenge.

"We know how good Argentina are," he said.

"Their performances in the Rugby Championship were quite special. You saw the big step up as they went through that."

And he warned Wales that Samoa were looking to spring another surprise on Friday.

"We go in there to win it," said Suasua.

"We think we've got ability to win it.

"In the past they have beaten Wales and every time a tier two country beats a tier one it's huge.

"It's all about belief, and we've got to believe in the work we've done this week and the systems and the players we've got."