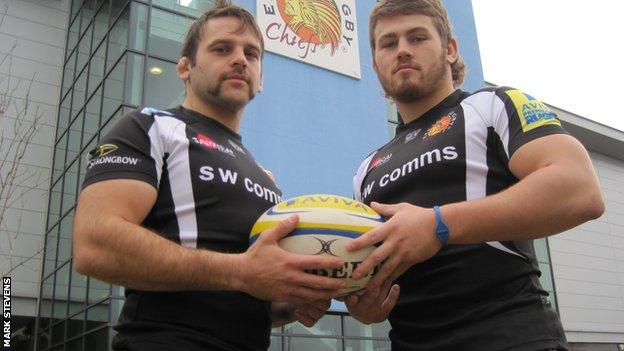 Exeter Chiefs forwards Chris Whitehead and Luke Cowan-Dickie have signed contract extensions to keep them at Sandy Park until 2015.

Hooker Whitehead, 26, has made six Premiership starts this season and was a replacement in the club's two Heineken Cup matches.

Cowan-Dickie, 19, made his Chiefs debut in the LV= Cup win over London Welsh last week.

"Keeping your front row strength is important at every Premiership club and these are two guys I see as being very good signings for the squad."

It puts me in a good position knowing I'm safe for a couple of years and allows me to knuckle down, build and get onto the first team bench

Whitehead moved to Exeter from London Welsh in the summer of 2010 as the Chiefs were promoted to the Premiership.

He signed a new contract in February 2011 and has made 36 Premiership appearances for the club.

"He's gone from strength to strength, it's not been easy for him, he's had to fight it out with some very good hookers, who I also hope will be around here next year."

Cowan-Dickie has risen through the club's academy system and has been a fixture in Exeter's 'A' League side this season.

"He's a guy we see with massive potential and we want him to stay as an Exeter player for as long as possible," the Exeter coach continued.

"He's a current England Under-20's player and I'd like to think he's someone we might be able to develop into a full England international down the line."

Cowan-Dickie says his ambition is to now try to push his fellow teammates and break into the Chiefs first-choice squad.

"It puts me is in a good position knowing I'm safe for a couple of years and allows me to knuckle down, build and get onto the first team bench and we'll see where it goes.

"To play last week was a good experience and it's good that Rob's got a big squad so us younger guys get the opportunity to put a good performance in and work our way into the Premiership squad."