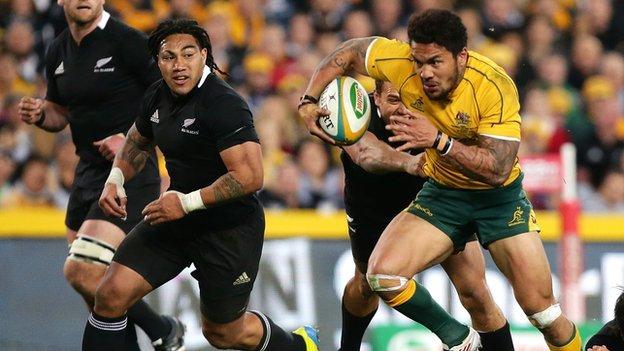 Fit-again wing Digby Ioane returns to the Australia side as they make four changes for Saturday's Test against England at Twickenham.

Versatile back Berrick Barnes, who comes in at full-back, second row Sitaleki Timani and tight-head prop Ben Alexander are the other changes.

Captain David Pocock, who had hoped to return after a knee injury, misses out because of a tight calf.

Australia go into the game on the back of a 33-6 thrashing by France in Paris.

"The key focus has been to take the meaning from it, and put that learning into practice for this week, both through our preparation and then onto the game itself," said Wallabies coach Robbie Deans.

"There aren't too many challenges in Test rugby that are greater than playing England at Twickenham.

"We are playing an England side that has been building up under its new leadership, and will see Saturday as the chance to lay down a marker for the future.

"They will be excited by the opportunities they saw out of our performance last weekend.

"But it goes both ways. Saturday is a significant opportunity for us as a group as well. It's going to be a great occasion, and one that the whole group is looking forward to."

Australia toured with a below strength squad after a bad run of injuries cost them the services of exciting backs Will Genia, Quade Cooper and James O'Connor, as well as second row and captain James Horwill.

And they have been forced into yet more changes, with Barnes coming in for Mike Harris and Alexander replacing Sekope Kepu, who both drop to the bench.

Ioane is in for Pat McCabe, who has a neck problem, while Timani comes in for Kane Douglas, who has a knee injury.

Powerful winger Ioane has sat out the last two Tests because of a knee injury.

Only five of Saturday's starting XV featured the last time Australia played England at Twickenham, the hosts recording a 35-18 success two years ago to reclaim the Cook Cup.