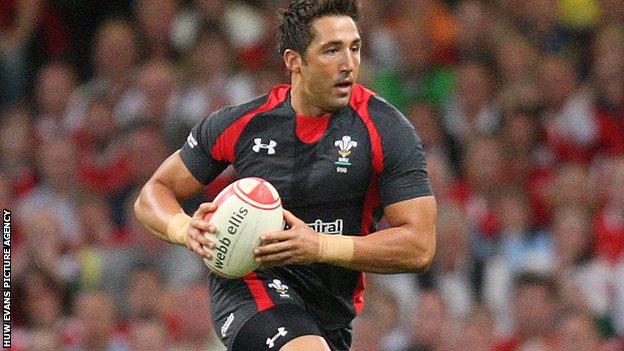 Gavin Henson believes Wales will bounce back against Samoa on Friday following defeat against Argentina.

Wales lost 26-12 to the Pumas in the opening game of the four-Test autumn series.

London Welsh fly-half Henson is confident Wales will beat Samoa and are also capable of defeating New Zealand and Australia.

"You don't become a bad team overnight and that's certainly something Wales are not," Henson said.

The 30-year-old broke a wrist during the game and subsequently missed the World Cup in New Zealand and played no part in Wales' Grand Slam campaign of 2012.

"They're one of the leading teams of world rugby. I've been so impressed by them," Henson added.

"I think that was just a blip. [It was their] first game together for a bit of a time and I think they'll put it right against Samoa.

"I'm not convinced by either of those two teams. I think when Wales get it right they can win."

After Friday's game against Samoa, Wales face World Cup holders New Zealand on 24 November before the visit of Australia on 1 December.

Captain Sam Warburton has been dropped to the bench for Friday's match, one of eight changes announced by interim coach Rob Howley.

Justin Tipuric replaces Warburton at open-side flanker and Henson said his former Ospreys team-mate has been in fine form.

But the former British Lion said the omission of Warburton in the wake of the Argentina defeat had come as a surprise.

"It's surprising … he's [Warburton] been our best player for the last two years," Henson said.

"I'm sure he's disappointed but I'm sure he'll put everything right to get back in there.

"The whole team didn't really play that well and I'm sure they'll turn that around against Samoa."