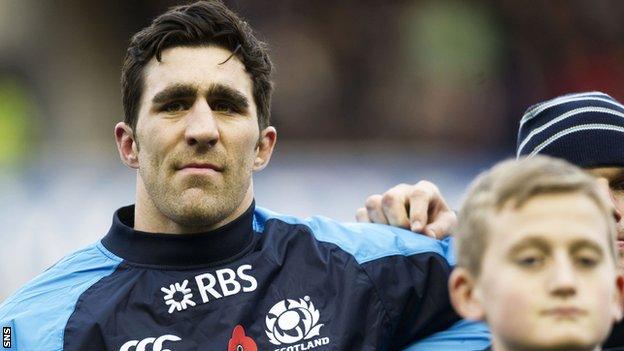 His side go into their next autumn international almost two years to the day they beat the Springboks 21-17.

"The fact that we won last time, they'll be looking for a bit of payback I'm sure," said Brown.

"It's up to us to make sure we nail a really high level of performance, make it happen and do the nation proud."

Scotland drew encouragment from their three tries against New Zealand on Sunday, but Brown realises there is still ample room for improvement.

"In patches we played well but as soon as we switched off and sat off them they made us pay," he said.

"For us, looking forward, we've learned our lessons and we know that we need to be consistent for the full 80 minutes.

"We've got our defensive structure and it's just a case of applying it better than we did last Sunday.

With the World Cup draw approaching in December, another victory versus South Africa would yield some precious ranking points.

And the flanker, who won his 50th cap against New Zealand, is confident they have the game-plan in place to to do exactly that at Murrayfield.

"It's a case of mixing things up, not letting the side we're playing against settle and really attempting to put them under as much pressure as we possibly can," said Brown.

"It's not only the backs that have got to attack. It's up to us as forwards to make sure we are giving them fast ball and giving them the ball when they want it."