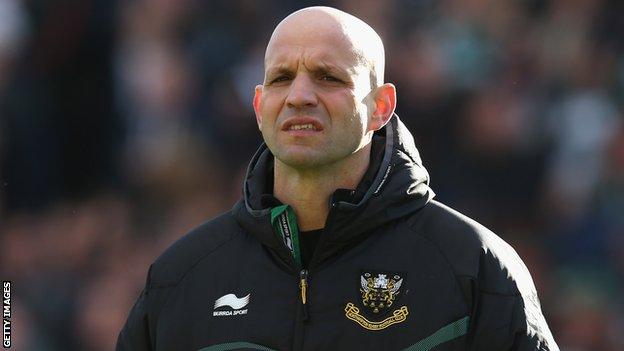 Northampton Saints director of rugby Jim Mallinder says their squad is strong enough to cope with their injury crisis and turn results around.

Mallinder told BBC Northampton: "We're not blaming players [being] away or anything like that. We do think we've got the squad and we know we can do it.

"We need to be better. We've got an opportunity to put that right."

Saints started the Premiership season with five wins and they are away to Newport-Gwent Dragons in the LV=Cup on Sunday.

"It was an opportunity for some of the younger lads last week," said Mallinder.

"We want an 80-minute performance, to get back to winning ways and to look forward to the league after that."

Lock forward Christian Day hoped to return from his ankle injury and play a key role for Saints during the autumn internationals, but was forced off against Harlequins. But Mallinder could call on Lee Dickson, Phil Dowson and Courtney Lawes against Dragons.

"Christian has had a re-occurrence of the injury that he had previously," said Mallinder. "He's had an operation on that, so he'll be out for a number of weeks.

"Courtney hasn't trained properly with the squad, so we'll wait and see. We don't want to rush players who've been out a number of weeks back too early. He's making good improvements.

"Lee will be involved this week, as will Phil Dowson. What you don't want is too many weeks off - it's fine to have a week, but players need to play. Both those will be considered.

"The squad - whoever we put out - will be competitive."