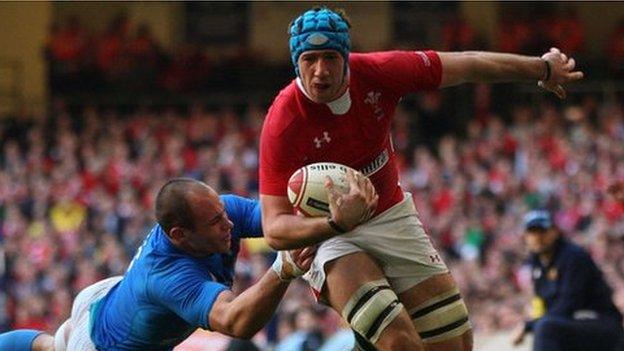 Justin Tipuric admits he has a tough job competing with Wales captain Sam Warburton for the number seven jersey.

Tipuric has been selected at openside flanker, with Warburton relegated to the bench, for the clash with Samoa.

The in-form Ospreys flanker is one of eight changes to the Wales side which lost 26-12 to Argentina.

"Sam is a quality player and it is hard to try and win the jersey but personally I just try and do my job for the team," said Tipuric.

Sam is a quality player and it is hard to try and win the jersey but personally I just try and do my job for the team.

The 23-year-old, who has been capped seven times by Wales, had been one of the form players in Wales during the early part of the season.

He made his Wales debut against Argentina in 2011, but has had to bide his time with Warburton as Wales captain.

But Tipuric, who made two appearances off the bench during Wales' 2012 Grand Slam campaign, dimisses any idea that he intends to make a statement with Warburton on the bench.

"Rugby is a team sport and if the team is playing well, you know you are doing your job," said Tipuric.

"It's simple. It's about the 15 on the field, rather than individuals.

Warburton, who has been Wales captain since leading the side to the 2011 World Cup semi-final, has admitted he is struggling for form himself this season.

An impressive performance by Tipuric against Samoa could see him keep the number seven jersey for the forthcoming clashes with New Zealand and Australia at the Millennium Stadium.

"We haven't really thought about those two games and we are just thinking game by game," said Tipuric.

"We want to win every game we play. When you put that red jersey on you have to go out there and perform."

Tipuric does admit there has been in a real edge in training after the defeat to the Pumas and that they are prepared for the physical threat posed by Samoa.

"Training has been tough, we had to get straight back on the paddock to sort things out and what went wrong," said Tipuric.

"We want to make up for last weekend and put a performance in."