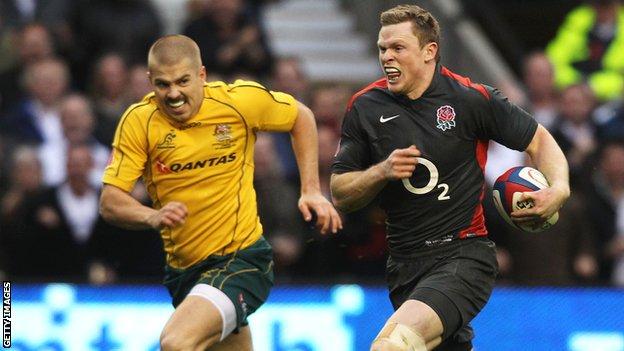 England face Australia in the second of their four autumn Tests, having secured a big win over Fiji in their opener last Saturday.

England have won the last two times the old rivals have met and go into the match as favourites to make it three in a row.

Australia have been hit by injuries - although they will have a far more experienced squad on duty than England on Saturday - but you can never write off the Wallabies.

Over the last few years every time England have played Australia the media has hyped up how the Wallaby scrum should be destroyed.

But when the Aussie scrum was really taken apart, in 2005 and 2007, it was Andrew Sheridan at the heart of it - and he's down on the south coast of France now.

Outside those games England really haven't taken the Aussie scrum apart but because the Wallabies got pummelled by the French pack last weekend the expectation is there again.

When England beat the Aussies in 2010 - when Chris Ashton scored that great try - no-one talked about the scrummaging that day.

And while it is important, you don't hang the game on it - England have to work on so much more.

So the real key area is?

What happens at the breakdown will, as always, be crucial and without doubt Australia are not as strong without the world class David Pocock at open-side flanker - but his replacement Michael Hooper is an expert on the ground.

He's small, quick, can get over the ball and is hard to move. England open-side Chris Robshaw will have his work cut out to beat him to most breakdowns.

The way to nullify Hooper is to keep the ball off the ground - stay on your feet, wait for your support to arrive before going to ground and never go on isolated runs, because Hooper will win the penalty.

Fly-half Toby Flood has to make sure he doesn't send an isolated prop into an area where Hooper's waiting, because there's only going to be one result, the ball will be turned over.

I don't think England do it any more than any other side but it's stupid play that needs to be eradicated - it's as bad as running into touch and England have to be smarter than that on Saturday.

England need to take the Aussies on in the line-out and in the centres.

Australia are one of the best exponents of the line-out and Nathan Sharpe is having a brilliant end to his long career - he's finding great form.

He's Australia's main line-out source, along with Dave Dennis, but despite Sharpe's excellence England should be able to target those two.

They also have to target the Wallaby midfield, with Brad Barritt and Manu Tuilagi punching holes and making ground against Adam Ashley-Cooper and Ben Tapuai.

It's important that England's ball runners buy time by staying on their feet to wait for support, but they must not jeopardise quick ball.

England must work hard to increase the tempo of their play and better running angles will give wingers Ashton and Charlie Sharples more room to operate in.

My biggest worry is that the Aussies read the deep ball from Flood to fellow playmaker Alex Goode and either intercept, or get Goode man and ball, force a turnover and run away to score.

England could work that in their favour by having runners close to Goode that he can pop balls to.

Flood kicked well last time out and needs to do the same again. Australia must be punished for giving penalties away.

If England can make the game faster than normal I believe the Aussies will tire easily. Mentally they are weary and their injuries have made it hard with all the chopping and changing.

Recalled winger Ashton has a habit of scoring against the Aussies and England will hope he finds that knack again - he's not crossed the whitewash for nine Tests now.

If there's a concern it is that Ashton has a habit of trying too hard, rather than letting his instinct do the job.

I always put poor form down to what's happening off the field. Last year there was a bit of disruption with Ashton's move to Saracens and a bit of animosity around that.

It affected him - he said it himself - but he's had enough time now with Saracens, everything seems to be going well there and I think he's finding his form - we'll find out at the weekend.

His anticipation of where the ball will end up allows him to get on the end of moves ahead of the defence and he is still one of the most instinctive finishers in world rugby.

And what about the Aussies?

Australia are missing talented backs Will Genia, Quade Cooper and James O'Connor, but winger Digby Ioane is back and will be dangerous.

His try against Argentina in the last game of the Rugby Championship - a well-worked backs move off a scrum with good decoy runners that saw him go under the posts - was trademark.

If I was in this Aussie team I'd be wanting the tour to end pretty quickly - they're absolutely battered after a hard season and they got hammered in France.

These guys want to get home, have Christmas and start looking forward to the Lions, because they're looking pretty unsettled at the moment.

There's been a lot of chat about the future of coach Robbie Deans - is he going to be sacked, is he staying? There's also the disagreement with Quade Cooper - add this to the injuries and the enforced team changes and they've been in better shape.

Despite everything that's going on they'll still go into the match ranked third in the world - although where they'll be come the end of the tour, who knows?

Verdict: England will win by about 10 points.