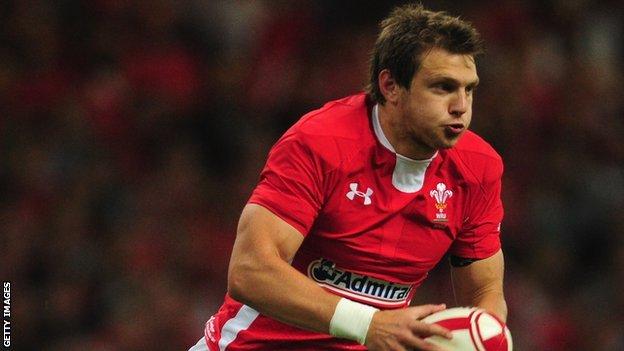 Wales fly-half Dan Biggar wants to stay with the Ospreys and not join the exodus of top Welsh rugby stars to France.

The 23-year-old starts for Wales against Samoa on Friday having been selected ahead of Rhys Priestland.

But his preparations have been overshadowed by stories linking him with a move to France.

"I'm hoping to sort things out with the Ospreys sooner rather than later," Bigger told BBC Wales.

"The bottom line is I want to get things sorted as quickly as possible, and hopefully we can do that."

Biggar apparently turned down a move to Racing Metro last season and has been heavily linked with a move to France's Top 14 league when his Ospreys contract expires next summer.

The drain of players to France is a major concern for the Welsh Rugby Union and the regions.

Jamie Roberts has confirmed he is leaving the Cardiff Blues at the end of the season and is expected to join Wales team-mates Gethin Jenkins, Mike Phillips, James Hook and Luke Charteris in France next summer.

Biggar insisted he wants to stay in Wales. "As long as things are sorted quickly enough, that's the bottom line," he said.

The more immediate concern is how to impress the Wales management and get his stop-start international career on course.

He will not have to worry about goal-kicking against Samoa with full back Leigh Halfpenny taking care of that department for Wales.

But the ever-confident Biggar does not necessarily see that as a good thing.

"If you're a goal-kicker you always want to be goal-kicking and it's disappointing not be be kicking on Friday," he said.

"But you've got someone like 'Pence' [Leigh Halfpenny] in the team and it's just he's more regular in the team than me so he has first call.

"In a way it takes a little bit of pressure off, but I've been used to goalkicking every game for the last three or four years, it'll come as a bit of a shock.

"But I think my mum and dad will be glad there's a bit of pressure off."