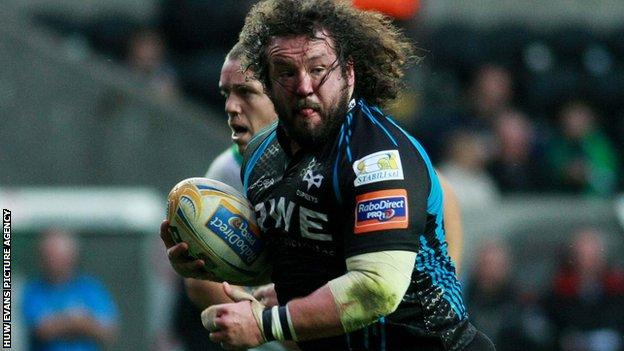 Adam Jones's knee injury will rule him out of the Ospreys' back-to-back Heineken Cup games against Toulouse.

The 83-times capped Wales prop damaged his knee in the Ospreys' 39-22 defeat by Leicester in October.

Jones, 31, was ruled out of Wales' autumn Test series with the injury.

"He still requires a further six weeks to get him back to the condition required to reach a position where he will be able to return to playing," said Ospreys physio Chris Towers.

As well as the double-header with Toulouse on 8 and 15 December, Jones will also miss the Welsh Pro12 derby against the Scarlets on Wednesday, 26 December.

But he could return against Newport Gwent Dragons at Rodney Parade on Monday, 31 December.

"Although Adam remains unavailable due to the knee injury he re-aggravated in the Leicester match, we are happy with the progress he is making in his rehab," said Towers.

"In line with the initial rehab plan, he still requires a further six weeks to get him back to the condition required to reach a position where he will be able to return to playing."

Aaron Jarvis, Jones's understudy at the Ospreys, replaced the 2009 Lions Test star in the Wales side to face Argentina and Samoa and is in pole position for the forthcoming clashes with New Zealand and Australia.

The Ospreys have also confirmed that young tight-head prop Joe Rees faces a "lengthy" lay-off after sustaining a neck injury.

The 22-year old reported to the medical team after last Friday's LV= Cup win over Gloucester with neck symptoms and investigations have shown he faces time on the sidelines and possible surgery.

"We've had Joe scanned and initial discussions, given the nature of his injury, is that he is going to be unavailable for a lengthy period of time and is likely to require surgery," said Towers.

"We are looking at the best options to treat and resolve the symptoms and will be in a position to update further once we've completed the consultancy process and can identify all available options."