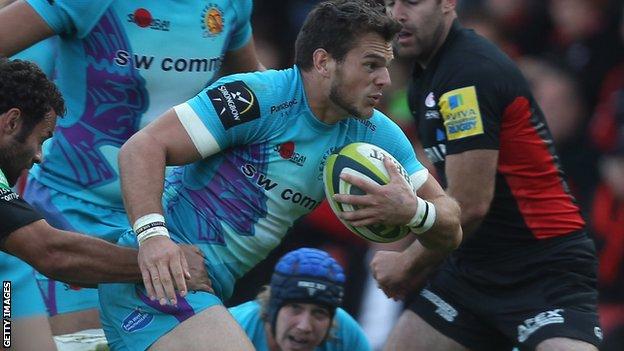 Exeter Chiefs winger Mark Foster wants to use the LV= Cup as a chance to force his way back into the club's Premiership squad.

The 29-year-old has made just two replacement appearances in the Premiership in the past two years but scored a try in the 42-15 win over London Welsh last week.

"It's always nice to get on the scoreboard," he told BBC South West.

"Hopefully we've given some of the coaches a real selection headache."

The former Gloucester player joined Exeter in the summer of 2009 and was instrumental in their promotion to the Premiership the following summer, scoring 12 tries.

He scored five tries in 16 appearances the following season but has fallen out of favour since then, despite signing a two-year contract in February 2011.

"Of course it's frustrating, no-one would have got to this level unless you're competitive," he continued.

"Everyone's had lots of top-level experience, playing in the Heineken Cup, Premiership and international standard.

"As a result everyone wants to be playing week in, week out.

"But if guys are playing well in a winning side, and are on form, it becomes very hard to drop them.

"You can only control the things in front of you.

"We went out against a London Welsh side that wasn't that different from the Premiership side which we narrowly lost to, and we put in a big performance.

"Hopefully we can prepare again for another big game against Ospreys.

"If we have another big result then we can start asking questions for the following week when we get back to the Premiership," he added.