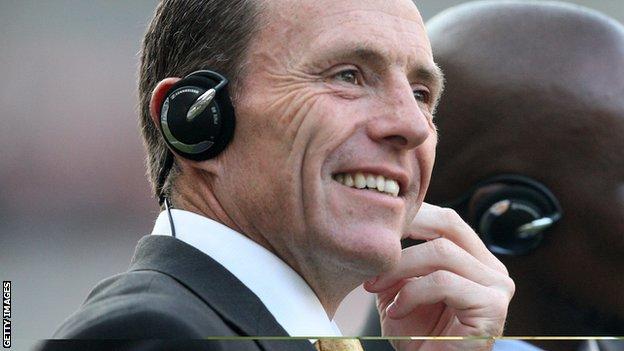 Joel Stransky was dismayed to hear sections of the Murrayfield crowd jeering at kicking opportunities.

The boos of the Scottish support failed to distract Dan Carter as New Zealand racked up a 51-22 win last weekend.

"As a kicker, I don't think booing ever had an impact on me," said former South Africa fly-half Stransky.

"But it's not nice. We call this a gentleman's game and rugby has values that have existed for a long time. It's contrary to what we believe in."

South Africa are next up for Scotland, with Pat Lambie on kicking duties following his three penalties and one conversion in last weekend's 16-12 win over Ireland.

The victory in Dublin was a new-look South Africa's first away success this year, following the draw in Argentina and losses to Australia and New Zealand in the Rugby Championship.

And Stransky, who starred in the 1995 World Cup final - scoring all the points in a 15-12 success against the All Blacks, believes the team are still finding their feet.

"This is a team in transition, although there are a lot of wonderful players," he told BBC Scotland's Sport Nation.

"There is a lot of experience mixed in with some unbelievable, youthful talent.

"I'm just not sure they are hitting their straps right now.

"I think there is a bit of work to be done on game plan and strategy."

The South African squad is packed full of powerful characters but Stransky would like to see them add more variation to their physical game.

"I'm not sure the biggest player is always the best player," he added.

"Heyneke Meyer always wants to win in the contact area but he wants to run at the man not the space and I don't think that is where the game should be played.

"Look at New Zealand, who are the best side in the world by a country mile, they are big and strong but so skilful, they move the ball around and run into the spaces.

"We are not using the width of the field and kicking the ball away too often and a good team will punish you."

Saturday's Test at Murrayfield comes two years on from the Springboks' last trip to Edinburgh, when the then world champions were beaten 21-17.

"I think they will be cautious," was Stransky's verdict on the visitors' approach.

"Over-confidence has come back to haunt them before.

"The Scots at Murrayfield are always incredibly passionate. They will put everything on the line and South Africa will need to match that."

You can hear Joel Stransky on BBC Radio Scotland's Sport Nation at 11:00 GMT on Saturday.