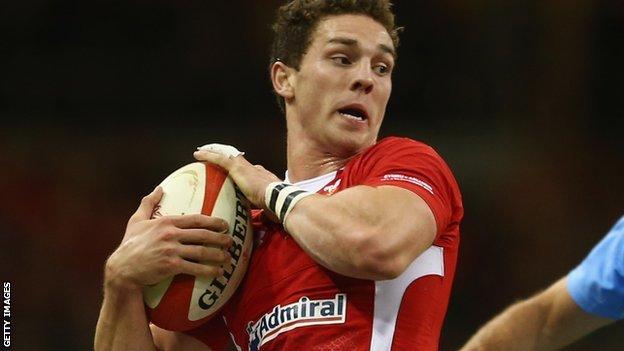 George North has been ruled out of Wales' match with New Zealand on Saturday because of a hip injury.

The 20-year-old wing sustained the injury in training on Tuesday.

Liam Williams, whose only previous Wales appearance came as a full-back against the Barbarians in June, will replace his Scarlets team-mate.

"It's a blow, obviously. We are all well aware of the threats George possesses," said forwards coach Robin McBryde.

"We are just fortunate we have someone like Liam [Williams], who has been performing consistently well for the Scarlets, filling in for him."

North, scorer of 11 tries in 25 appearances for Wales, will remain with the squad for treatment in the hope of recovering to face Australia in the autumn series finale on 1 December.

His injury means Wales will now show six changes to the side defeated by Samoa to face New Zealand, with Sam Warburton returning as captain.

Ospreys trio Hibbard (shoulder), Evans (knee) and Biggar (shoulder) were all ruled out with injuries sustained during the bruising 26-19 defeat to Samoa at the Millennium Stadium on Friday.

Centre Ashley Beck, the sole try-scorer in Wales' two games so far, drops out of the match-day squad while open-side Justin Tipuric drops to the bench to accommodate Warburton's return.

Gethin Jenkins, who has struggled for regular starts since he moved to Toulon in France, has failed to reclaim his starting place and is on the bench, with Paul James at loose-head prop. Aaron Jarvis continues at tight-head.

Head coach Warren Gatland, who is back in charge for the final two autumn Tests against New Zealand and Australia after being away on British and Irish Lions duty for the past two weeks, has warned his side of the task they face against the current world champions and Rugby Championship winners.

"This New Zealand team is one of the best rugby sides to have ever played the game and probably the best All Blacks team ever, so it will be a privilege to be able to test ourselves against them," said New Zealander Gatland.

"No one is more disappointed than the players and the coaches with how things have gone in the last two weeks, but those supporters who have been with us over the last 18 months know, just as we do, that we are a better side than we have displayed so far and we will be looking to show that on Saturday."

Gatland has seen his side suffer shock defeats to Argentina and Samoa in his absence, but hopes recent memories of New Zealand will inspire his men on Saturday.

"It's an honour to be playing the world champions at the Millennium Stadium this weekend," he added.

"Memories of the Rugby World Cup and touring New Zealand the previous summer [where Wales lost the two Tests 42-9 and 29-10] are still fresh in the mind of many of the players and staff.

"The hospitality shown and the way we were looked after made the experience especially memorable and that makes it all the more special that we have the opportunity to face the best side in the world at the moment in Cardiff."

Wales were already without flanker Dan Lydiate, tight-head props Adam Jones and Craig Mitchell and hooker Huw Bennett ahead of the autumn series while lock Alun Wyn Jones and flanker Josh Turnbull joined them on the sidelines after suffering injuries in the 26-12 loss to Argentina.

The loss of Hibbard, Evans, Biggar and now North brings the list of absentees up to 10.

Hooker Hibbard, making only his fifth start for Wales, was felled by a crunching tackle from the outstanding Taiasina Tu'ifua.

He was replaced after 17 minutes by Owens and watched the remainder of the game from the bench with his arm in a sling.

Fly-half Biggar left the field bloodied and dazed following a head-first challenge in a ruck by Samoa lock Teofilo Paulo.