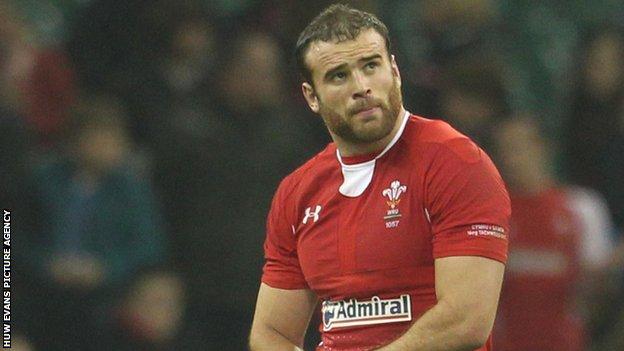 And he says only players are to blame for the Grand Slam holders' slump.

"Wales are waiting and they see this match as the [2011] World Cup final that should have been played but never was," he wrote in the NZ Herald.

Sam Warburton's side were tipped to reach that final down under with some believing they were the tournament favourites before they lost to France in the semi-final following Warburton's sending off.

New Zealand have not lost to Wales in 24 encounters since Ken Jones scored the winning try for the men in red in 1953 - a game in which Fitzpatrick's father Brian played on the wing for the visitors to Cardiff.

"Leigh Halfpenny had a great game [against Samoa], but is he a full-back because he doesn't add anything outside in an attacking influence, like Lee Byrne used to.

"There's no confidence from Rhys Priestland.

"If you compare the ball from the rucks, the pace of the ball, Mike Phillips was slow getting it and it was shifted on and they just drifted wide.

"It's really sad to see this Welsh side because… we know they are a better side.

"There'll be no expectation for Wales next week and that might be a good thing because they know that if they perform at their best they'll give a good account of themselves.

"If they don't it could be a severe hiding."

They overpowered Scotland 51-22 to kick off their trip to the northern hemisphere, following up with a 42-10 win over Italy in Rome on Saturday.

Ex-New Zealand hooker Fitzpatrick stated: "I am not trying to talk up the game, nor ignore the fact that the Pumas beat Wales... or that Samoa beat them .... there were some extenuating circumstances."

Fitzpatrick cites the absence of British and Irish Lions coach Warren Gatland from his Wales role, with Robert Howley instead in charge for the two defeats, as an important factor.

He also highlights the absence of flanker Dan Lydiate through injury as significant and said: "I mean no disrespect to Howley, but it does not help having your main coach absent."

Fitzpatrick added: "All the talk I have heard coming out of Wales is how they are focusing on the All Black test.

"Gatland will be back by then and the dropping to the bench of Wales skipper and flanker Sam Warburton to 'freshen' the side against Samoa is a further clue, I believe, that the Welsh are really setting their caps at the All Blacks next Sunday [NZ time].

"A one-off approach makes them even more dangerous.

"If they do well against the All Blacks, all that has happened before will be forgotten, even five straight losses."

Wales centre Roberts, 26, responded to questions over interim coach Howley being responsible for the loss of form by saying: "When you go through things like this it's easy to point the finger.

"The only people who deserve the finger pointed at them was us as players.

"As a group of players we've had fantastic preparation for these Test matches and there's no hiding away from it… and it's not good enough.

The 2009 Lions star tourist to South Africa also underlined how important a good performance against New Zealand has become to Wales.

"It's exactly the game we need to wake up and smell the coffee, really," said the player who will leave Cardiff Blues at the end of this season.

"[We need to] wake up and appreciate what is needed at the highest level because the All Blacks will provide the sternest challenge yet.

"The All Blacks are the best team in rugby, that's probably ever played the game... and if we're not all on top of our game, we're going to come second best."

Wales wing George North said: "Hopefully we can conjure up something against the All Blacks.

"They are the hardest team in the world to try to get a win against, but we are really focusing on it."

Interim head coach Rob Howley hands the Welsh reins back to Gatland after registering one win in six games.

Howley will then be in charge for Wales' 2013 Six Nations title defence while Gatland prepares to guide the Lions down under.