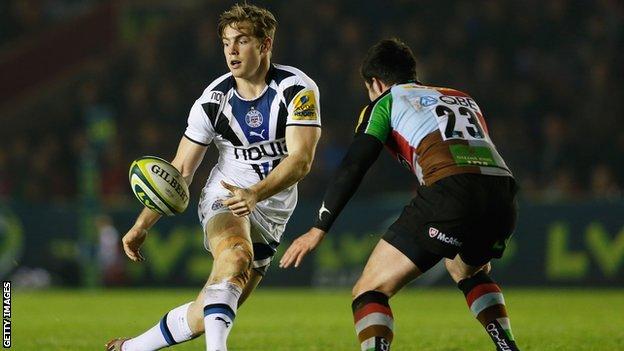 Uncapped Bath fly-half Tom Heathcote has been called up to the Scotland squad for Saturday's match with Tonga.

Heathcote, who was born in Inverness but has played at age-grade level for England, joins Andy Robinson's pool as five players are released from duty.

"I am delighted to be called up to the Scotland squad," the 20-year-old told the Scottish Rugby website.

"I've always known I was eligible to play for Scotland and I'm grateful to be given this opportunity."

Robinson added: "Tom has worked his way into the Bath first team squad from the academy and we've been monitoring his progress for the last couple of years."

Heathcote's decision to opt for an international career with Scotland is a blow to England head coach Stuart Lancaster's long-term planning.

In July, Lancaster omitted Heathcote from the second-string England Saxons squad, but described the fly-half as being "on the cusp" of his Elite Player Squad.

Lancaster said Heathcote was one of a group of young players who he was "really looking forward to seeing develop in the next 12 months and beyond".

Glasgow Warriors trio Ruaridh Jackson, Alex Dunbar and Tom Ryder and Edinburgh's Lee Jones have dropped out of the original squad for the match with Tonga, along with Jones's club-mate

Flanker Alasdair Strokosch, a late withdrawal from the team that faced the Springboks, may also be a doubt.