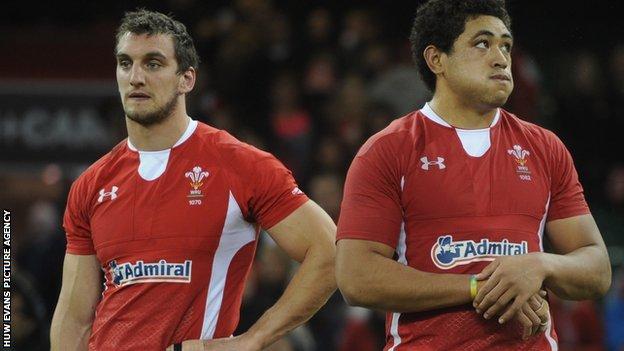 Captain Sam Warburton believes Wales can bounce back from defeats by Samoa and Argentina to stun World Cup holders New Zealand in Cardiff on Saturday.

Wales have not beaten the All Blacks in 24 attempts since 1953.

But 23-year-old flanker Warburton says his Six Nations Grand Slam holders can create their own bit of history.

"There is every chance we can win next Saturday - I definitely believe that. You have to believe that in every game you go into," he said.

"But whether people think that is realistic or not is up to them.

"If I was a fan in the stand, I would be gutted that Wales had lost their last five games, and the players are exactly the same. We want Wales to do well as much as anybody else, so the players will feel that."

The All Blacks are unbeaten in their last 19 Tests, having overpowered Scotland 51-22 to kick off their trip to the northern hemisphere, following up with a 42-10 win over Italy in Rome on Saturday.

Meanwhile Wales, back at the helm at the end of Robert Howley's first stint as interim coach, are staring at a sixth successive defeat and potential autumn whitewash if they also lose to Australia on 1 December.

But none of that fazes Cardiff Blue Warburton, who led Wales into the 2011 World Cup semi-finals where they were beaten by underdogs France in a game in which he was sent off for a dangerous tackle.

"I guess there is no pressure on us now because nobody will expect anything next Saturday," he said.

"We are going to see who turns up on the day. That is sport, that is why there are underdogs, and underdogs can beat the favourites."

The then tourists succumbed to an 11-point deficit over those three encounters and Warburton added: "Players in the side are not going to forget the way we played back at the World Cup, in the Six Nations last season and in the summer [against Australia].

"That doesn't just go with a flick of the fingers. It is still the same players - it's not as if it is a new squad or we've brought new guys in.

"We have to remember the way we played not too long ago, and then do it again.

"We are just going through a rough patch at the moment, but I am more than confident it will come back. As long as we stay positive we can pull it out of the bag.

"Since I have been involved in the starting team, the last 18 months, this has been the toughest time, really.

"It's been five Tests on the bounce now we have lost. I haven't experienced that before. It is unusual, and it will be a test now for the boys to see who the tough ones are.

"It's easy when you win and this is a test for a lot of the players and a lot of the leaders of the squad to make sure we put things right.

"We are all in this together. As long as we keep our spirits high, I am sure we will come through it quite quickly."