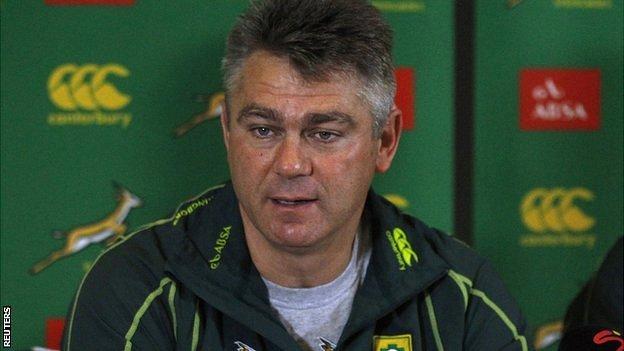 South Africa coach Heyneke Meyer is preparing his side for the "ultimate test" when they take on England at Twickenham on Saturday.

The Springboks beat Scotland 21-10 at Murrayfield on Saturday while England were losing 20-14 to Australia, but Meyer expects them to bounce back.

He told BBC Sport: "England will be even more motivated [after the defeat].

"Saturday will be the ultimate test. England has a great team and we've got a lot of respect for them."

England lost the first two Tests of their three-match summer series in South Africa but ended a run of nine straight defeats by the Springboks with a 14-14 draw in the final match.

South Africa won the first Test 22-17 and took the second 36-27 and Meyer, who is scheduled to name his team for the game on Wednesday, is expecting another close match in west London.

"When we played them at home each match was 50-50 and even the third Test was a draw," he said. "They are always much better at Twickenham.

"They have moved on [under coach Stuart Lancaster] and are trying to play a more expansive game.

"He is a great coach and he'll defintely go places."