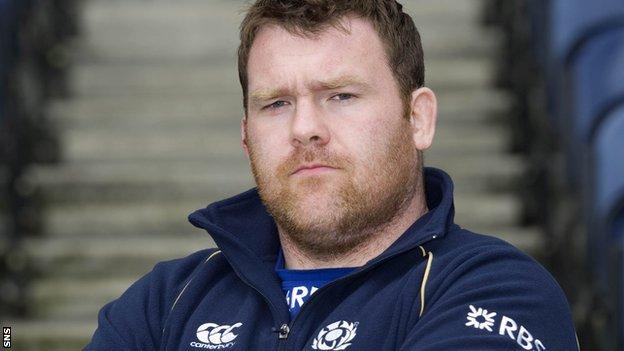 The 34-year-old Edinburgh loose-head has struggled with injury this season and did not feature against South Africa at Murrayfield on Saturday.

Nicknamed "Chunk", Jacobsen won the first of his 65 international caps against Canada in 2002.

His final international appearance was as a replacement for Ryan Grant against the All Blacks on 11 November.

Jacobsen said: "To play international rugby you have to be absolutely committed.

"You have to make sacrifices and do all the extra stuff in training and preparation to be right.

"I've always tried to do that throughout my career and playing for Scotland has meant the world to me.

"But the minute there is the possibility of it feeling like a chore, well, that's the slippery slope for me and I would never want to do anything that would either devalue the Scotland jersey or anything that I've achieved."

He was not included in last summer's tour to Australia, Fiji and Samoa.

Robinson paid tribute to Jacobsen, calling him "a great servant of the Scotland team".

He said: "On behalf of the team management I want to thank him for all his endeavours.

"I particularly admire how hard he worked to fight back from injury after the 2007 Rugby World Cup and the effort he put in to be our starting prop in all four games at last year's World Cup in New Zealand.

"Chunk has often said that rugby has been good for him and his family and now that he wants to make his wife Gayle and daughter Maisie a bigger priority, then I'm sure all rugby people will support Chunk at this time and in the future."

Edinburgh head coach Michael Bradley will still be able to call upon Jacobsen's services in the Rabo Direct Pro12 and the Heineken Cup.

"Having spoken with him it's absolutely clear that he is 100% committed to the Edinburgh Rugby cause," said Bradley.

Jacobsen is Edinburgh's longest-serving player, having been with them since he was 15. He made his debut for the club in a friendly against the touring ACT Brumbies in November 1997.

Jacobsen took up rugby at Prestonpans and turned professional ahead of the 1999/2000 season.

His combative style made him a fans' favourite at Murrayfield and he holds the record for the most appearances for the club, having played in the black and red more than 250 times.

He signed a new three-year contract with Edinburgh in February 2010, not long after returning from a six-month lay-off after damaging his shoulder against Italy.