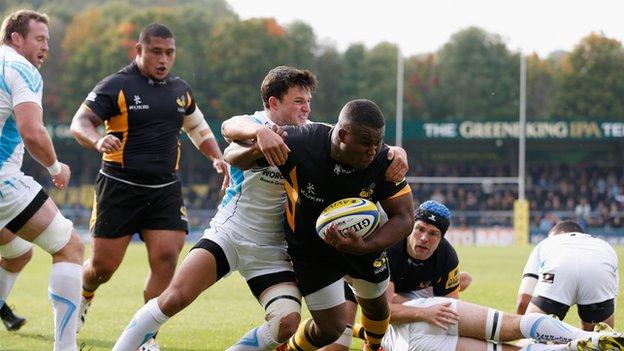 Worcester Warriors hope to have learned lessons from their second defeat by Wasps at Adams Park in six weeks.

Sunday's 28-19 LV= Cup reverse was not as narrow as the on 7 October, Tommy Bell's three penalties proving the home side's winning margin.

"It was a chance for our youngsters to put pressure on starting players," said assistant coach Nigel Redman.

It's very frustrating, but the errors are things we can rectify

"And they've learned that to play at this level in front of 5,000 at Adams Park, you've got to be more accurate."

After trailing just 13-12 at the break, despite running in first-half tries through Alex Grove and Andy Short, Worcester were finally seen off by two home scores in the final quarter.

The Warriors did retaliate with a 72nd-minute try in the left corner by replacement winger Ben Howard.

But, although Joe Carlisle made it two out of three conversions, he did not match Bell's 13-point haul with the boot.

"You can't fault the effort. We played with a lot of endeavour, but lacked the accuracy.

"It's very frustrating, but the errors are things we can rectify.

"There were a lot of youngsters out there looking to stake a claim.

"Richard de Carpentier was a massive plus, while Ollie Hayes and Rob O'Donnell both got a full game, but everything now focuses on getting back to Premiership action on Friday night against Saracens."

Worcester began this season's LV= Cup campaign with a 34-18 win over Scarlets at Sixways.

But their defeat by Wasps hampers their qualification chances ahead of their return to action in this competition in the new year when Richard Hill's side are scheduled to take on London Irish (away, 26 January) and Saracens (home, 2 February) over successive weekends.