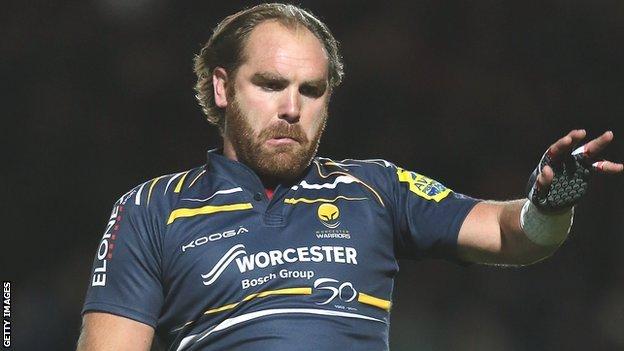 Worcester stretched their unbeaten home run to six games as they beat Saracens at Sixways for the second year running.

Former England stand-off Andy Goode was the home side's hero as he won his kicking contest with Nils Mordt.

Goode landed three of his five penalty attempts and a drop goal, as well as just missing with another more ambitious long-range drop goal attempt.

We were full of intensity, commitment and passion for the whole of the 80 minutes

Opposite number Mordt, by contrast, landed just one of his four penalty attempts for Sarries.

A poor game, not helped by so many missing international players, saw little attempt by either side to play attacking rugby.

But the Warriors were simply pleased to get back to winning ways after a in their last Premiership outing at Exeter three weeks ago.

Goode's 30-metre penalty put the hosts ahead, but they suffered a blow when young centre Joe Carlisle hobbled off in the 14th minute.

Mordt levelled the game at 3-3 with his second attempt at goal and this proved to be his only successful kick.

But Goode made light of the wet conditions to land two more penalties and a rather scruffy drop goal to give his side a 12-3 half-time lead.

There was no scoring after the break but Saracens dominated the first 10 minutes of the second half, only to twice loss possession at crucial times.

Saracens would have gone top with victory as leaders Harlequins were

But the visitors, beaten now on their last three league visits to Sixways, were left frustrated by missed opportunities.

"What a performance. We were full of intensity, commitment and passion for the whole of the 80 minutes.

"We have been feeling a bit of pressure because we felt, as a club, we had gone into our shell over the last three weeks but, from the kick-off tonigh,t we were terrific.

"It wasn't pretty but the lads did a good job on them. We should have won the game by a lot more than 12-3."

"It was a dreadful game of rugby, I feel sorry for anybody who had to watch that.

"It was a very, very wet pitch but that's no real excuse. There was no flow to the game and it was very depressing.

"We made a lot of unforced errors and were regularly penalised in the scrum area which cost us field positions. When they got into our territory, they kicked their penalties which we didn't."