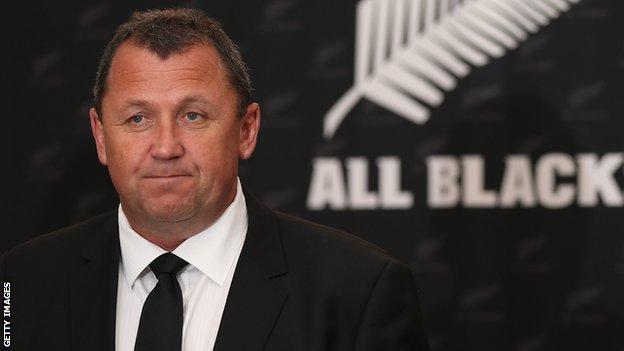 New Zealand expect Wales to turn up the heat when the teams meet in Cardiff on Saturday.

The Welsh are reeling after defeats against Argentina and Samoa while the world champions arrive in Wales on the back of wins in Scotland and Italy.

But All Blacks assistant coach Ian Foster expects a hot reception at the Millennium Stadium.

"We know there'll be plenty of heat coming at us and we're going to have to figure our way through that," he said.

The All Blacks, by contrast, were stylish 51-22 winners against Scotland on 11 November and triumphed 42-10 against Italy last Saturday.

Wales have managed just one try while conceding five in their two defeats, and have a long list of injury concerns.

And history is against the Welsh on Saturday, their last win against the All Blacks coming in 1953.

Coach Warren Gatland will be back in charge of Wales for the games against New Zealand and Australia.

He takes back the reins from interim coach Rob Howley before resuming his duties as head coach of the British and Irish Lions for the 2013 tour of Austrlia.

Foster spent time coaching at the Ospreys in 2008 and was a team-mate of Gatland at Waikato.

He said he wasn't shocked by Argentina and Samoa's victories over Wales.

"I wouldn't say surprised... it probably hasn't gone as well as they [Wales] would have wanted, clearly, but all it does it just highlights it's a game you've got to turn up prepared for week in week out.

"We're expecting them to target this game as a pretty big game for them and you know when you've lost a couple to have a game like this can be ideal in some way because it makes sure that the focus is very, very sharp

"But the same could be said of us.

"We played two very fired up teams, Scotland and Italy, who caused us issues throughout the game.

"We expect nothing different this week, really.

"It's always a bit special playing here, it's a fantastic stadium, a very proud country and we know that they're going to want to everything they can, so we're certainly aware of that."