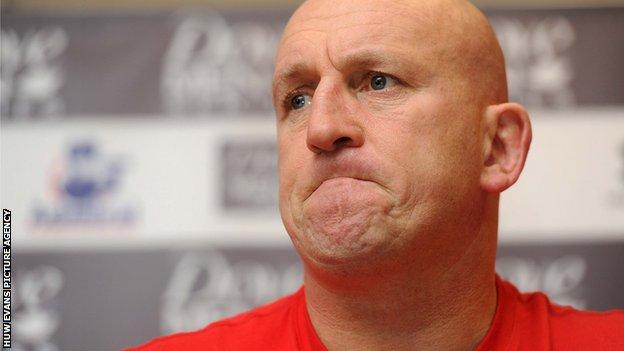 Wales assistant coach Shaun Edwards has warned Wales they could be "embarrassed" if they do not perform against New Zealand.

Wales have lost their first two games - Argentina and Samoa - of this autumn's Test series.

"We know if we don't perform, we could get embarrassed against the All Blacks," said Edwards.

The two sides meet in the Welsh capital in very different form, with Wales having suffered a 26-12 defeat to the Pumas, compounded by last Friday's 26-19 defeat by the Samoans.

In contrast, the All Blacks arrived in Cardiff ahead of the game with two comfortable victories over Scotland and Italy, having scored 11 tries amid an unbeaten 19-match run.

Edwards dismissed any suggestion that the pressure is off Wales because nobody expects the home side to end their 59-year, 24-match drought without a victory over New Zealand.

"For the players, the pressure is on," said Edwards. "We know if we don't perform, we could get embarrassed against the All Blacks.

"If you are slow into position, don't keep your defensive structure and if you give them too much possession - you will get punished.

"That keeps you on your toes, no doubt about that."

Edwards, who was part of the coaching team which reached the semi-finals of the 2011 World Cup, believes New Zealand are a better side now than the one crowned world champions a year ago.

Fly-half Dan Carter, who missed the final due to injury, is back running the show for New Zealand, while captain Richie McCaw, who was struggling with a foot injury when he lifted the William Webb Ellis trophy in Auckland, is also back to his best.

"The All Blacks are in better form now than when they went to the World Cup final," said Edwards.

"They have a settled team and they have not got as many injures as they had at that time.

"Obviously, Richie McCaw looks in great shape, while at Rugby World Cup he had a long-term injury which he has had a rest from.

"He looks back to his best, to be honest. So I would say the All Blacks are in better shape."