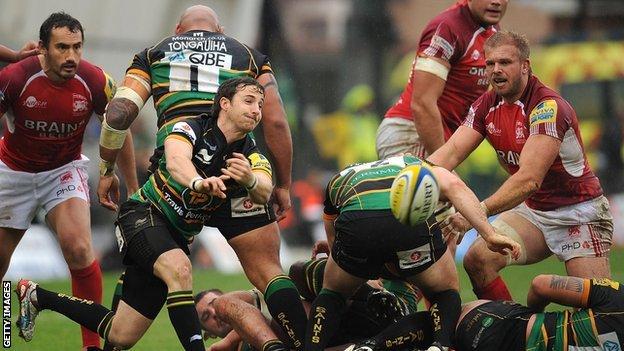 Northampton climbed back into the Premiership's top four after coming from behind to beat London Welsh in a scrappy game at Franklin's Gardens.

Welsh went ahead through a penalty try in the seventh minute and Gordon Ross's three points extended their lead, after Ryan Lamb's drop-goal.

Lamb and Ross played out a kicking duel as Welsh ensured a losing bonus point.

"They've got a big pack of forwards who are good in a lot of areas. We didn't get a chance to run them around and tire them out, like we usually want to, and they were able to stick in the game for long periods.

"We were a bit ill-disciplined at the start of the game, which was disappointing. Once they've got momentum, they're hard to stop.

"London Welsh are a pretty basic team but they've got a lot of spirit and they work hard for each other. A few sides have underestimated them this year and paid the price.

"I think Ryan Lamb has been pretty good in the last two weeks. Everybody makes the odd mistake. Today, a lot of his tactical work was really good."

"We are really pleased. We came here looking to leave with something.

"I was pleased with the attitude and the boys' approach to the game.

"Northampton have a huge reputation at set-piece time and we took them on there today.

"We just lost the kicking battle, but we stuck in there and I think we deserved a point.

"We will grow in confidence from this performance and you could argue we had the better of their pack today."