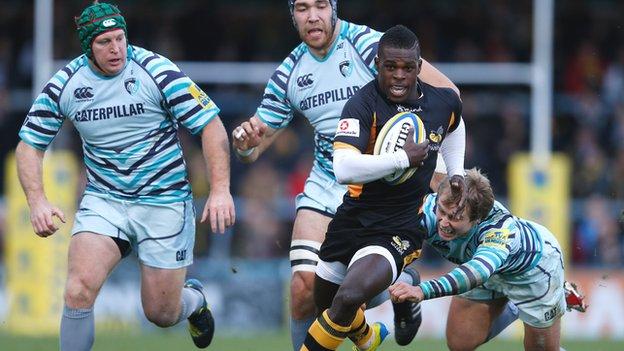 Wasps maintained their unbeaten home run this season with a narrow Premiership win over Leicester.

Tom Varndell got the only try of the game early on before Nick Robinson added three points and George Ford hit back twice with the boot for Leicester.

Ford was off target each side of the interval but landed two more kicks to keep the pressure on the hosts.

Varndell had a second try ruled out for a forward pass but Lee Thomas kicked six points to ensure the victory.

The result leaves Leicester, who have not won a Premiership game at Adams Park in five years, stuck in fifth but an 11-point victory could have seen them go top of the table.

The visitors, already weakened by international absences, lost centre Anthony Allen to illness before kick-off and started in the worst possible fashion when the competition's leading try scorer Varndell went over inside three minutes for his eighth of the campaign.

A clever switch of play by Joe Simpson, after Billy Vunipola's quick penalty, lead to a Tigers defensive mix-up, allowing Varndell to burst through Matt Tait's covering tackle in the corner.

Christian Wade danced and raced through Leicester a minute later in a mesmerising burst only to be hauled down inches short by Niall Morris.

Robinson made it 8-0 with five minutes gone before conditions deteriorated.

Ford pulled three back but the Tigers set-piece was faltering and the hosts were shading proceedings at the break down.

Elliot Daly missed a long shot from inside his own half and Robinson struck the posts minutes later when Wasps splintered Leicester at scrum time.

Leicester were streetwise and, despite not having the best of the half, drew the belligerent Vunipola into conceding two kickable penalties, although Ford was only successful with one.

Tigers firmed up their scrum at the break and won Ford another penalty, which the young fly-half converted to give his side the lead for the first time.

The slippery surface lead to handling errors on both sides as Wasps laid siege inside Leicester's territory.

Ford's boot made it a two-point game at 14-12 going into the final quarter but when Vunipola entered a ruck from the side with 10 minutes to go Ford missed the chance to put Tigers ahead.

Thomas pushed his third attempt across the face of the posts and, despite further promising breaks, Leicester's impressive defence held out to send them home with a losing bonus point.

"In reality we should have won that game more comfortably than we did.

"Leicester, being Leicester, just don't go away but I don't think they threatened us that much.We always felt pretty comfortable in defence.

"I thought the two young props - Simon McIntyre and Phil Swainston - did really well and James Cannon in the second row stood up.

"(That) I'm disappointed that we didn't make more of the opportunities is a positive thing for us.

"We have to be a little bit more accurate, ruthless and clinical to win these games because I don't want to go through that every week."

"It's disappointing to say the least. We had opportunities to win it, we just didn't have any field position.

"It was wet and greasy and there was no structure to the game at all."