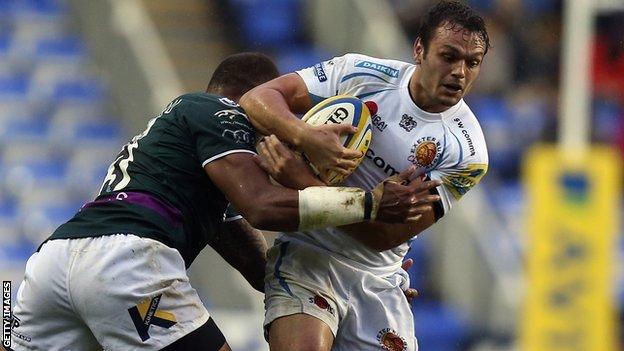 Luke Arscott touched down to extend Exeter's lead but Leo Halavatau was able to drive to the line to register an Irish response before half-time.

Topsy Ojo finished from Humphreys' cross-field kick but the Chiefs pushed on to secure victory.

The Chiefs' win, their first on the road in the Premiership this term, keeps them in sixth, level on 24 points with Bath, but above their West Country rivals due to a better points difference, while the Exiles still languish second-from-bottom, five points above Sale.

Dollman's early score set the visitors on their way and three quick penalties from Steenson overshadowed Ian Humphreys' sole effort with the boot in the opening stages.

Matt Jess was able to skip through a series of tame challenges and offload to Arscott for Exeter's second try, with Steenson picking up the extras.

But the Exiles shook off their poor start to register 16 points without response, landing tries either side of half-time through Halavatau and Ojo, with Northern Irishman Humphreys heavily involved in the build-up to both scores and adding seven points from the boot.

The home side briefly led when Humphreys was once again accurate from the tee but Steenson's penalty made it 24-23 to Exeter.

Jack Nowell had an opportunity to make the final minutes more comfortable for the visitors, but his try on the counter was ruled out for a knock-on.

Irish were finally finished off when Steenson added another three, leaving Brian Smith's side with just a losing bonus.

"They got a flyer in the first 20 minutes, we lost concentration and we lost our focus in defence.

"We gave ourselves a mountain to climb but with our try just before half-time it gave us a big momentum shift.

"Because they had such a good start it was a bit of a negative for them as they stopped playing.

"Our improved performance gave us a shot to win and we did a good job of running them down but they nailed their penalties at the crucial time and we missed ours.

"We had eight players away on international duty and another eight injured so it was good to salvage a bonus point."

"For the first 20 minutes we were very good and very dangerous as we were looking very direct and controlling the game.

"But then we started playing from side to side, just making passes and leaving the final man isolated. As a result we lost huge field positions.

"We made hard work of it and it's certainly a relief to pick up four points on the road. We've never won here and haven't won away in the Premiership so it's great to get the monkey off our back.

"They were without a number of players so on paper it's a game we should have won, but they were very tough and dogged in defence and in the end we had to grind it out."