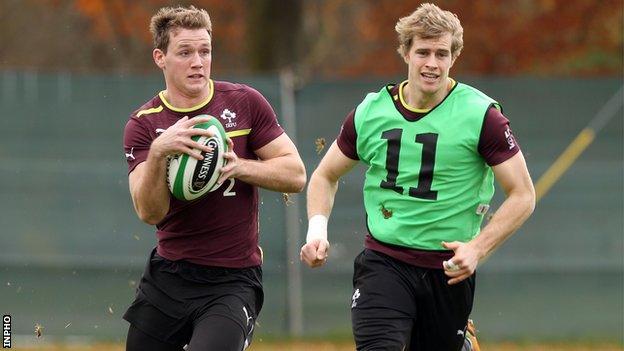 Craig Gilroy will win his first full cap after being chosen ahead of Ulster team-mate Andrew Trimble for Ireland's important Test match against Argentina.

Gilroy has been rewarded with the left-wing berth after his dazzling three-try performance in last weekend's uncapped international against Fiji.

It is the only change from Ireland's 16-12 defeat by South Africa at the Aviva Stadium on 10 November.

Jonathan Sexton has been passed fit to take his place at fly-half.

The Leinster number 10 was a late withdrawal from Ireland's replacements for the Fiji game in Limerick because of slight groin problem.

However, Irish management said that had merely been a precaution.

Earlier this week Gilroy signed a contract extension with Ulster until 2016 and on Thursday he was celebrating his impending Test baptism.

He has made 52 appearances for his province since making debut in November 2010, emerging as the leading try scorer in each of the last two seasons.

"I'm delighted to be involved. Obviously Argentina will be a different kettle of fish to Fiji," Gilroy said.

"I want to do well and take my opportunity. It's all happened pretty fast. I have to keep my feet on the ground and enjoy it."

The game with Argentina has added significance as the winners will secure a place in the top eight of the IRB rankings which are used to determine the seedings for the 2015 World Cup.

The losers will slip into the third tier of seeds for the 3 December draw and face the possibility of being selected in a pool containing two major nations.

Ireland will be attempting to end a five-Test losing sequence, their worst run for 14 years.

If Argentina add to their misery on Saturday, Kidney's position will come under intense scrutiny.

On Thursday, Kidney responded to the suggestion that he is under pressure by highlighting the unfamiliar appearance of his squad.

"Everyone knows this is a completely different squad and these players are learning game on game," said the Ireland coach.

"They'll get better and I couldn't ask any more from them."

Argentina have made four changes from last weekend's 39-22 defeat by France for Saturday's contest.

Juan Martin Hernandez returns at full-back in place of Lucas Gonzalez Amorosino with Nicolas Sanchez selected in the number 10 jersey.

Montpellier tighthead Maximiliano Bustos makes his debut at the expense of Juan Figallo.