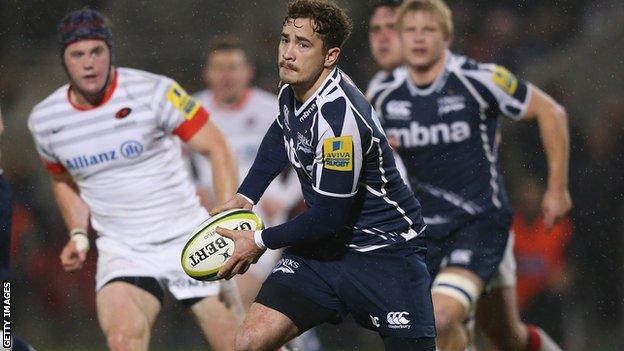 Danny Cipriani says he has already seen an improvement in performances in the short period since Steve Diamond took charge of first-team affairs at Sale.

Fly-half Cipriani, 25, told BBC Radio Manchester: "Whatever you think of him [Diamond] he's very good at his job and he's definitely got a good vision.

"He's really helped the forwards and made sure they've improved a lot."

Cipriani continued: "They're starting to show some consistency now, so that's credit to him and credit to that forward pack."

at the start of the season but was after Sale lost their first seven Premiership matches, their worst start to a league campaign.

Chief executive Diamond, who had a short spell in charge at the end of last season, and guided the Sharks to their

Sale have won one and lost one of their two pool matches in the LV= Cup, with scrum-half Dwayne Peel starting both games.

A shoulder injury kept the Wales international out of action for more than a month, but he has returned to form an impressive half-back partnership with the England man.

"We've enjoyed the last two weeks," said Cipriani. "He's [Peel] getting back into it and he's a world-class player, so he's getting back into the swing of things very quickly and very easily. He'll be flying by next week."