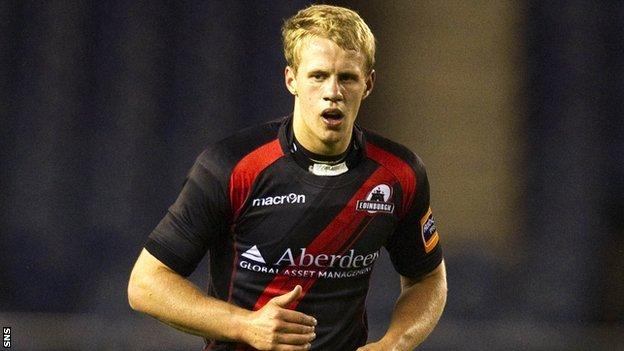 Edinburgh ended their run of seven straight defeats with a convincing Pro12 win over Ospreys at Murrayfield.

Matthew Morgan scored all Ospreys' 13 first-half points, with a try and conversion and two penalties.

But the Welsh side failed to add to that after the break, with Gregor Hunter's boot Edinburgh's key weapon.

Willem Nel had scored a first-half try for the hosts before Hunter made Ospreys pay for two yellow cards with five second-half penalties.

The result eases the pressure on Edinburgh coach Michael Bradley.

The visitors took the lead after a rather stale quarter of an hour, Morgan knocking the ball through the posts moments after Edinburgh's Richie Rees's saving tap tackle had interrupted a swift break.

Hunter, in his 12th Pro12 appearance for the Scots, levelled midway through the first period when he struck a penalty confidently from the 22.

Ospreys, with Welsh squad members Ashley Beck and Ryan Bevington in their side, laid siege to the home defence, which stood firm under sustained, if unimaginative, pressure.

But the Welsh moved back in front from Morgan's right boot when he scored a penalty awarded to Ospreys for Edinburgh not releasing the ball.

The Edinburgh fans must have been concerned that Ospreys were going to continue their run of form that saw them beat the Scots twice in the competition last season.

However, a beautifully worked try on the right wing involving Rees, Dougie Fife and Nel put Bradley's side ahead, with Nel diving over the line after well-timed offloads.

Hunter missed the conversion to leave the score at 8-6 in Edinburgh's favour.

Ospreys immediately were on the front foot and pinned Edinburgh back before Morgan darted across from five metres out. The same player made no mistake with the conversion.

Hunter was a frustrated figure when he sliced a penalty wide of the posts early in the second period, awarded to Edinburgh when Ospreys prop Owen Williams was sin-binned for repeatedly refusing to bind on to his opposite number in the scrum.

The Edinburgh number 10 made no mistake in 46 minutes when referee David Wilkinson gave the capital side a penalty as they made their one-man advantage count against a lop-sided scrum.

Fife looked lively throughout and had the white-shirted Ospreys retreating when his break down the middle evaded all but Richard Fussell. Edinburgh worked the ball out to the right and a try looked possible until John Houston let the ball slip through his fingers.

Hooker Ross Ford was dropped from the Scotland squad to face Tonga on Saturday and he did not have his best match for his club against Ospreys, groggily leaving the field just before Edinburgh edged ahead.

With Williams still kicking his heels on the sidelines, Edinburgh won a penalty from yet another messy scrum. The stylish Hunter squeezed it home to make it 14-13 ahead after 53 minutes.

Edinburgh were another Hunter penalty to the good, when a fine tackle by Fussell on Tom Brown, as he waited for the ball to drop kindly 10 metres out, kept Ospreys in touch.

Hunter had scored his fifth penalty of the second half when Morgan went agonisingly close to a try after Hunter's kick had been charged down. The Ospreys star kicked the ball on but was stopped a foot from the try line by five black jerseys.

With Williams back on, Sam Lewis was sin-binned, leaving the Welsh side needing two scores to win.

But it was the Scots who looked the more likely to add to their tally, especially when Greg Tonks drove through the Ospreys midfield before being halted by Rhys Webb.

Hunter hit the post with yet another penalty and struck a drop goal a fraction wide before the Edinburgh players celebrated the sound of the final whistle.