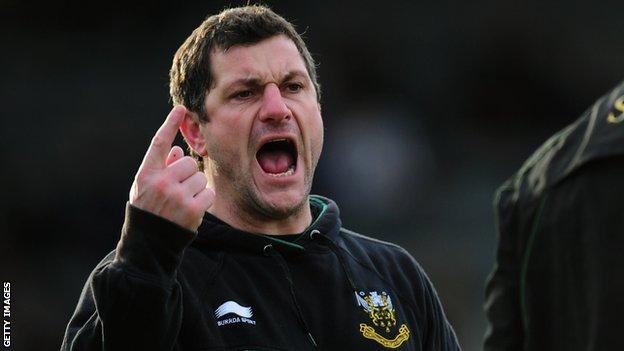 The former England fly-half, a member of the 2003 World Cup-winning squad, is Saints' all-time highest points scorer and a former director of rugby.

"I'm really surprised. He's been a stalwart. He's been there a long time as a player and a coach. During my time there he has been very positive in looking after me and setting me on the right track.

"From a team perspective he drills our defence and looks after our kickers and does a lot of hard work behind the scenes.

"He's a real likeable bloke who's passionate about the game and I'm sad to see him go."

"I have put heart and soul into the club over many years, as have my wife and children," he said.

"After 19 years at Franklin's Gardens I need to prioritise my wife and children and make some sacrifices for them."

He added: "As such I am happy to step away from my role with the club in good health and on the right path, and look forward to exploring the many opportunities that are out there in the world of rugby."

He also scored 400 points in 32 appearances for England, a total exceeded by only Jonny Wilkinson.

Grayson became joint-Saints boss in November 2004 and helped the club away from relegation on the last day of the season, and after taking sole charge went on to lead the team to the Heineken Cup semi-finals three years later.

However, he was demoted to backs coach at the end of the 2006-07 campaign following relegation to the second tier.

Since then, he has worked as Jim Mallinder's assistant and has been part of an instant return to the Premiership, LV= Cup and Amlin Challenge Cup victories and an appearance in the Heineken Cup final in 2011, when they lost to Leinster.

Mallinder said: "The records he set as a player will take something special to break, and as a coach he has helped bring on some very talented individuals.

"We will use this as an opportunity to freshen things up and move things forward."

Saints chairman Leon Barwell added: "It's fair to say that we would not have won the Heineken Cup without him, and we were proud to see him represent the club on the biggest stages of all.

"We are parting amicably and I'm sure that everyone associated with the Saints wishes Paul and his family every success in whatever he chooses to do in the future."