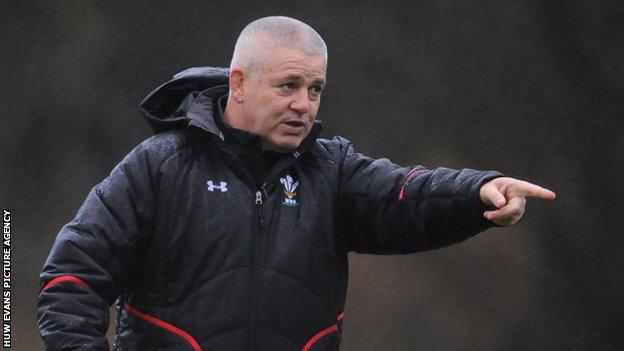 Warren Gatland has defended his absence as Wales head coach while being on British & Irish Lions duty.

The New Zealander handed over the reins to interim coach Rob Howley who oversaw Wales' defeats over Samoa and Argentina.

Gatland is now back in charge for the New Zealand clash on Saturday.

"We have had a couple of disappointing weeks, but I think the benefit of that will be shown in the next couple of years," said Gatland.

"And I think long-term that will be good for the development of Welsh rugby.

"I think everyone will look back at on the last two weeks of experience and I think it will make them better and stronger going forward."

Gatland, who coaches the Lions on their tour of Australia in 2013, had come in for criticism for being absent for the last fortnight.

Former Wales captains Gareth Thomas and Jonathan Davies have been critical of Gatland being on Lions duty during the first half of the autumn internationals.

Davies said he was concerned that Wales' 2015 World Cup ranking has suffered as a result of Gatland's absence. The Welsh Rugby Union has approved Gatland's absence for the matches against Argentina and Samoa.

It's not a physical issue. It's just getting the head right and facing a daunting challenge, but being excited about it

But the New Zealander, who coached Wales to the Six Nations Grand Slam in 2008 and 2012, said part of him relinquishing his role temporarily was to look to the future.

"One of the things I've spoken to [WRU group chief executive] Roger Lewis about: I'm not going to be here forever.

"And part of my role [is with regards] the development of Welsh rugby and coaches. We are in a building phase now until 2015."

Gatland resumed his head coach role by naming a Wales side showing five changes from the Samoa defeat including the recall of captain Sam Warburton.

The coach conceded the last two weeks' results, which has extended Wales' losing run to five internationals, had been a setback but one the players could bounce back from.

"It's nice to be back and we have chatted about the disappointments of the last two weeks and getting things back on track this week," he said.

"It's not a physical issue. It's just getting the head right and facing a daunting challenge, but being excited about it."