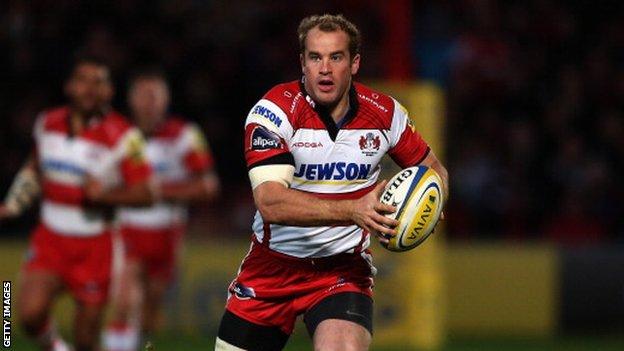 Gloucester winger James Simpson-Daniel has had shoulder surgery that will sideline him for up to four months.

The former England player, 30, had the operation at the weekend having last played on 3 November.

Gloucester director of rugby Nigel Davies said: "It's a blow for James and for us, particularly with the way he has been playing.

"He was in excellent form. He had had a good pre-season, was looking fresh and was playing exceptionally well."

Kingsholm favourite Simpson-Daniel, who has 10 England caps, had played every minute of the Cherry and Whites' Premiership campaign this season until he was substituted at half-time against Harlequins on 3 November.

Davies added: "We are hugely disappointed because James was a big part of what we'd been so far this season.

"He had an operation and there was damage in his shoulder and that has been repaired. That will keep him away from action for about three to four months.

"In one regard he is on the way to recovery, but it's going to be a reasonably lengthy process.

"Now it falls on to the next guys to come in and do exactly the same. We've played without him on a couple of occasions before and we've been able to do that."