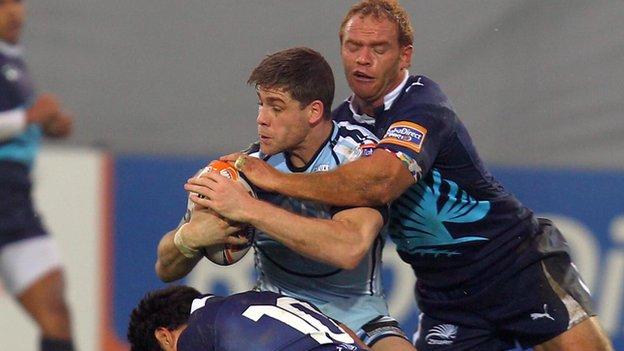 Cardiff Blues recovered from a half-time deficit to end a run of four Pro12 defeats by beating bottom side Zebre.

The Italians, who are still searching for their first win of the season, took an early lead through Samuele Pace's converted try - scored when the Blues had lost Robin Copeland to the sin bin.

Nathan Trevett replied with a 27th-minute try, unconverted by Ceri Sweeney, for a 7-5 half-time score.

But the fly-half landed three penalties after the break to see the Blues home.

Sweeney played a significant part in the Blues' try, charging down an attempted Zebre clearance before the ball reached prop Trevett on the left wing.

The victory moves the Blues up to seventh in the table, and maintained their perfect record against Italians opposition in the competition.

There was also a welcome return to action for the Blues' Kiwi forward, Michael Paterson, who has recovered from two shoulder operations.

Cardiff Blues coach Phil Davies said: "I was really pleased with the way the players played with massive effort and lost of control in many ways.

"But for errors at the end of moves we could have scored three or four tries.

"The commitment the players showed to get the result was fantastic."