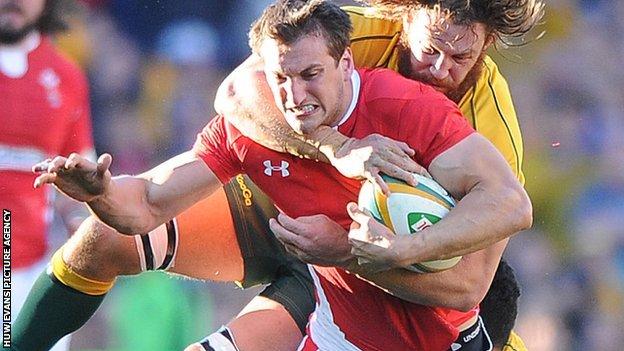 Sam Warburton believes Warren Gatland's return will make a big difference when Wales face the All Blacks on Saturday.

Assistant coach Rob Howley was in charge for the defeats against Samoa and Argentina.

Now Gatland is back from his duties as Lions coach, with re-instated skipper Warburton giving the New Zealander a big vote of confidence.

"It seems that everything is back in place now for these next two games and preparations are going well," he said.

"I thought the management staff beforehand have done a fantastic job. With Rob Howley, I thought out in Australia we did very well under him, though we didn't get the victories we wanted.

"But now that Warren's back, he has had a massive influence on lot of the players and I'm sure the management team as well. I'm sure Warren is really excited to have his first game back against his home country."

Gatland will coach the British and Irish Lions on their tour of Australia in 2013 and was on Lions duty as he missed the defeats in the opening two autumn internationals.

The decision to allow Gatland to miss the games has attracted criticism, especially as the results have seen Wales drop to eighth place in the International Rugby Board rankings.

Those rankings will be used to decide the seeding for the World Cup in 2015, with the draw being made in December.

Warburton didn't start the game against Samoa on 16 November, but was reinstated as captain by Gatland for the All Blacks match.

His return is one of five changes to the starting line-up made by Gatland from the team which lost 26-19 to Samoa.

He believes the return of the coach will be a boost.

"It will make a difference because Warren is a great coach," Warburton added.

"He has earned a very good reputation because he [Gatland] is a top-class coach and he has all the respect of the players and staff, so it is great to have his presence back."

Warburton says he understands criticism of the team's performances against Samoa and Argentina, which have seen Wales concede five tries and score just one.

"If I was a fan I would be upset with the last two performances," he said.

"I have got my brother texting me [asking] 'What went wrong?' and my family and things so I can understand where people are coming from, so the players more than anybody want to make sure we put it right."