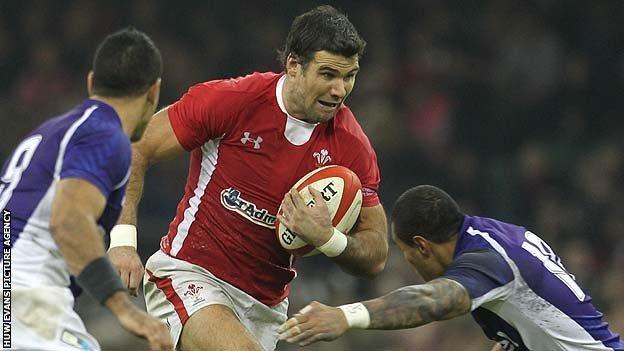 Scrum-half Mike Phillips has demanded Wales put the pride back into the red jersey against New Zealand on Saturday.

Wales suffered shock defeats to Argentina and Samoa in the first two games of their autumn Test series.

The Six Nations champions are looking for a first win since 1953 against the All Blacks, with the world champions unbeaten in their last 19 Tests.

"It's a chance to put some pride back into the jersey on the weekend," said Phillips, who has won 70 caps.

"We have been disappointing and off the boil in many aspects of our game and maybe confidence is down at the moment.

"In many ways, we have nothing to lose this week. We can go out there and give everything in the game and really throw everything at them. Who knows what will happen then?"

Wales coach Warren Gatland, who was away on British and Irish Lions duty, is back at the helm for the next two clashes with New Zealand and Australia.

He has made five changes to the side beaten by Samoa, with captain Sam Warburton, centre Jonathan Davies, fly-half Rhys Priestland, hooker Matthew Rees and lock Luke Charteris all recalled to the starting line-up.

Wales have not beaten the All Blacks for 59 years, suffering 24 straight defeats since their last victory back in 1953 on home soil.

Phillips, who now plays his rugby for Bayonne in the Top 14 in France, was a second-half replacement in the 26-12 defeat to Argentina and started the 26-19 defeat to Samoa.

He has revealed the Wales players have asked themselves some searching questions since the Samoa defeat and has called for the Grand Slam champions and World Cup semi-finalists to rediscover their self-belief.

"We have to believe in ourselves, nobody else is going to do it for us," said the 30-year-old.

"We are the ones out there and have to play and we have to believe in ourselves. If we don't do that, we are not going to achieve anything.

"We have to show a lot more passion and fire than what we have done. We cannot fear making mistakes or the stage we are on and have to express ourselves.

"We have to put a performance in and get certain factors of our game right. We certainly have to improve on what we have done so far."