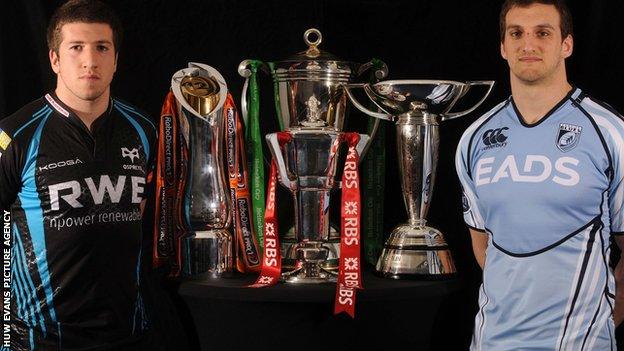 Wales head coach Warren Gatland says he is dismayed at what he sees as media attempts to create a rift between Sam Warburton and rival Justin Tipuric.

"I did find it frustrating, the comparison," said Gatland.

"[The media were] playing one off against the other and that one has been picked and one has been dropped, and almost trying to create a rift."

And he added: "The quality we have in that position is an absolute luxury."

Interim coach Rob Howley's decision to start with Tipuric rather than Warburton for the game against Samoa last week received widespread coverage in the media.

And Tipuric said before the game that he felt his rivalry with Warburton was driving both men on.

Warburton, who is Wales captain and led his country to the 2011 World Cup semi-finals in New Zealand and the 2012 Grand Slam, has been under increasing pressure from in-form Tipuric of the Ospreys.

The Wales skipper has even gone as far to admit he has been struggling for form during the early parts of the new season.

The Cardiff Blues flanker started for Wales in the 26-12 defeat by Argentina but was not in the starting XV for the 26-19 defeat by Samoa.

Both players have been talked of as favourites to be picked by Gatland for the British and Irish Lions tour of Australia next summer.

And the coach dismissed suggestions that Warburton had been dropped for the clash with Samoa at the Millennium Stadium.

"It was always the decision that Justin was going to play against Samoa," said Gatland.

The New Zealander claims the competition between "two world-class sevens" should be celebrated by every Welsh rugby fan and says he cannot understand the need to criticise either player.

"Coming from New Zealand, it would have been a different view," said Gatland.

"There would have been a celebration that we have two world-class sevens and probably two of the best sevens in the northern hemisphere.

"We shouldn't criticise it but celebrate it and say how lucky we are."