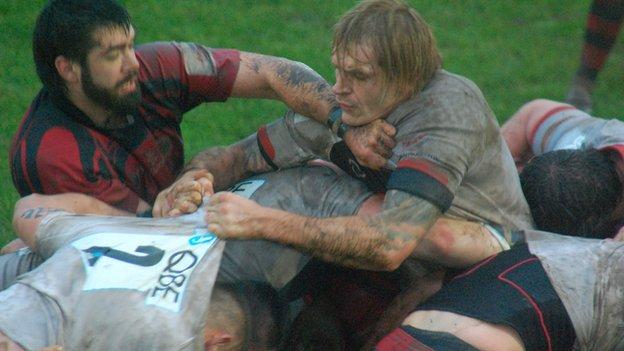 Newcastle Falcons made it 10 straight Championship wins with a 24-3 victory at relegation-fighting Jersey.

The islanders took the lead with a Barry Davies penalty, but it was their only score of the game.

Jimmy Gopperth went over to put Falcons 5-3 ahead before the league-leaders really showed their superiority in the the second half.

Ryan Shortland, Grant Shiells and Alex Tait - on his 100th appearance - all touched down to clinch the bonus point.

I thought we did brilliantly, I was really proud of the lads again

"It wasn't a stroll by any stretch of the imagination," Falcons boss Dean Richards told BBC Radio Jersey.

"In the first half Jersey's options were far better than ours and we struggled sometimes defensively.

"I think we're being very workmanlike in the way we approach things, it was a hard game and we loved it."

At the break, just two points behind, Jersey fans would have had hopes of pulling off an upset.

But in the second period the islanders were rarely able to get out out their own half.

"We thought we let them off the hook a bit in the first half, missing a couple of crucial kicks," said Jersey boss Ben Harvey.

"The first five minutes of the second half killed us really.

"I thought we did brilliantly, I was really proud of the lads again, and it was a great effort against a very, very good side."

Jersey remain second-from-bottom of the Championship table, while Newcastle are now 13-points clear at the top,