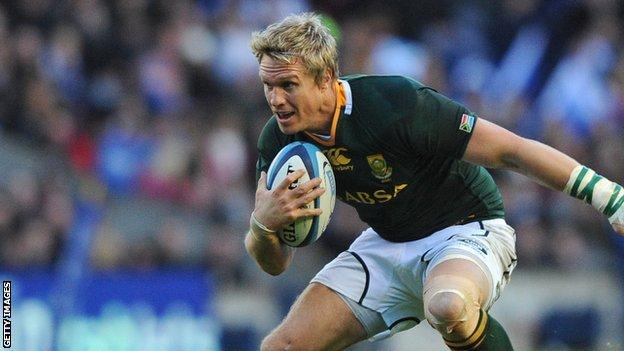 South Africa have named an unchanged starting XV for Saturday's Test against England at Twickenham.

Eben Etzebeth, who was cleared on Tuesday of making contact with the eyes of Scotland fly-half Greig Laidlaw, starts in the second row.

The Springboks aim to complete a clean sweep of tour wins, following victories against Ireland and Scotland, and a fourth straight win at Twickenham.

South Africa have not been beaten by England in their last 10 meetings.

Last week Heyneke Meyer's side beat Scotland 21-10 at Murrayfield, where JP Pietersen and Gurthro Steenkamp both picked up knocks.

However, both have been cleared for selection and the only changes are on the bench, where prop Pat Cilliers comes in for the injured CJ van der Linde and fly-half Elton Jantjies replaces Morne Steyn.

Springbok captain Jean de Villiers will become the fifth most-capped Springbok of all time when he plays in his 84th Test.

De Villiers will pass Bryan Habana, who is not on the tour because of injury, and move behind John Smit (111), Victor Matfield (110), Percy Montgomery (102) and Joost van der Westhuizen (89).

"It's great to be able to field an unchanged team," Meyer said.

"We've been able to show some consistency in selection on this tour and that is a good thing.

"The players have worked extremely hard on the training field and it wasn't easy to select the match 23 for each of the three Tests, but I'm happy that we managed to stick to combinations."