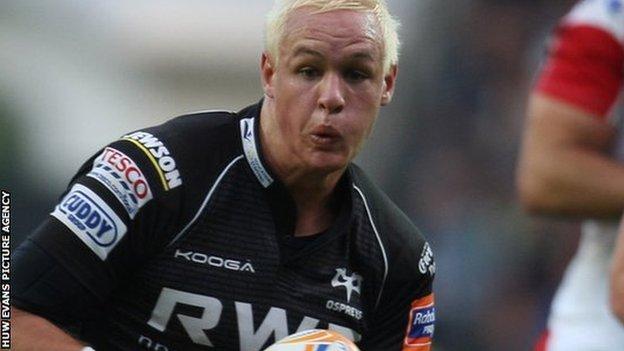 Ospreys wing Hanno Dirksen is likely to miss the rest of the season because of a knee injury.

The 21-year-old, born in South African, will have surgery to repair a cartilage problem in his right knee.

A rehabilitation period of six months is expected, with the Ospreys saying the operation could not be delayed.

"We've spoken to several specialists and the view is it is in Hanno's best interests to have the surgery now," said Ospreys physio Chris Towers.

"We've taken a long term view on what is best for Hanno's career.

"At this stage we are probably looking at a post-op rehab process of around five to six months, it's not something we can rush."

Dirksen and fellow wing Eli Walker eased the Ospreys worries about the hole in their squad left by the departure of British & Irish Lions wings Shane Williams and Tommy Bowe at the end of the 2011-2012 season.

The wing, who spent his teenage years in the United States after moving from South Africa, will qualify for Wales in 2014.

His initial spell in the UK was on a student visa, when he played for the Ospreys as an amateur, and because of that his residency qualification for Wales started in January 2011.

Dirksen signed for Swansea in the Principality Premiership, ended the season as top try-scorer with 21 tries in 22 games and was voted the young player of the year.

Those performances persuaded the Ospreys to sign him in January 2011. He has scored 14 tries in 42 appearances for the region since.

Dirksen hails from Krugersdorp in the Gauteng province of South Africa and moved to Nashville with his family in 2006 while still a teenager.

He represented the USA at age grade level and became the youngest player to represent the Eagles at senior level when he featured in the non-capped match against Munster in Connecticut in August 2008.

Dirksen came to Britain to study at Truro College on a scholarship for the 2008-09 academic year before transferring to Neath Port Talbot College in September 2009.