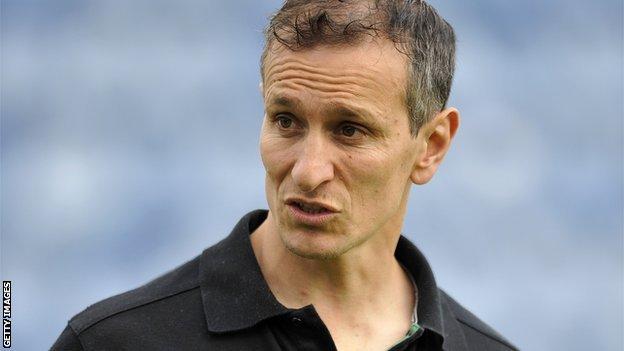 He steps up after Paul Grayson left the club by mutual consent after 19 years.

"What we need is some new ideas. Alan will change things up and he's got his own ideas," director of rugby Jim Mallinder told BBC Northampton.

Alan Dickens now has a fantastic chance to prove he has the tactical and creative nous to reawaken the Saints from their mid-term slumber.

He'll also have to sort out the defence which has been breached far too many times these past few months. Jim Mallinder says he's in no rush to appoint and may sign separate defence and attack coaches.

But with a crucial end of year fixture list looming, fresh thinking and ideas are essential.

"The backs have at times played some decent rugby but we've made a number of mistakes and not scored as many tries as we'd have liked."

Mallinder continued: "Alan has done really well with the academy and the Wanderers and we'll see how it goes. I'm sure he'd love the job."

Dickens, 36, had a 10-year playing career in the Premiership with Saints, Saracens, Leeds Carnegie and Sale Sharks and also coached Derby RFC in the final two years before his retirement.

Saints are in no hurry to replace Grayson, who made 259 appearances for the club as a player and helped them to two cup wins as a coach.

"Whether that's Alan Dickens or somebody else, we'll look around now. There's lots of good coaches throughout the world.

"We'll see who's out there and if it takes to the end of the season, that might be it, but we've got to get the right man into the position," said Mallinder.

"It's a very important job. I'm there to oversee everything, Dorian West is doing a cracking job with the forwards and the new man has got to do that with the backs and our attacking game.

"We don't necessarily want one person. Paul Grayson not only did attack and the backs, he did kicking and the defensive work and did a really good job at that. We'll look at a number of combinations."

Mallinder admits that Grayson's departure was one of the most difficult decisions he had to make during his time at the club.

"Paul Grayson has been a fantastic player and coach and a really valuable member of the team," he said.

"[But] we've got to look to evolve and move on, and between the pair of us, we thought it was the right thing to do."