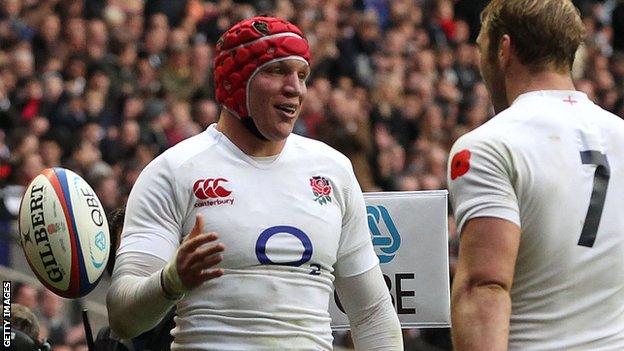 Exeter Chiefs head coach Rob Baxter says Tom Johnson's omission from the England squad to face South Africa is down to the team's poor performance rather than that of the flanker.

Johnson was one of on Tuesday after the defeat by Australia last week.

"I think Tom's been incredibly unlucky but sometimes it happens," Baxter said.

"Players get dropped on the back of a team performance rather than an individual performance."

Johnson had been an ever-present in the England side since the tour to South Africa in the summer and earlier this month.

"He's been away on a tour and been involved with England for a little while now, and most people have been very complimentary about the way he's played.

"It seems like a couple of weeks ago he was being seen as a bolt-on for the British Lions tour and now he's back with us.

"It's a bit of last man in, first man out when they've looked to make changes and freshen things up, which I can understand.

"From a coaching perspective, if you have a team that hasn't performed you do look at various ways of changing things.

"Tom's probably a bit unlucky in that Stuart Lancaster considers he's got other options in the back row and he wants to make changes."